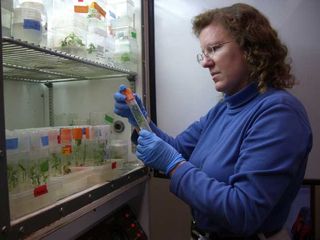 Plant biologist Sharon Doty works in the lab with experimental poplar tree cuttings that can break down the pollutant trichloroethylene at rates 100 times that of the normal plants.
(Image: © University of Washington)

Genetically engineered grass and trees could help remove toxins and explosive residues from the environment more quickly and cheaply than ever.

For more than a decade, researchers have investigated whether genetically modified or transgenic plants could help clean up contaminated sites by taking up pollutants using their roots. The genes that researchers plugged into these plants could then break down impurities such as carcinogens, or cancer-triggering molecules.

"So many of us have been impacted by cancer that I am strongly motivated to find ways to reduce the amount of carcinogens from our environment in a fast and economical way," said researcher Sharon Doty, a plant biologist at the University of Washington. "There are 12,000 extremely contaminated sites called SuperFund sites in the United States and more than 500,000 abandoned, polluted commercial properties in the U.S."

Scientists have experimented with using plants to clean up the environment in the past, a technique known as phytoremediation .

"Phytoremediation is basically a solar-powered pollutant removal system," Doty said. "It is more than 10 times cheaper than other technologies. It is less intrusive and more aesthetically pleasing.

However, "phytoremediation is often viewed as being too slow to be of practical use," Doty said. "Many sites are abandoned rather than cleaned up because of the cost of effective cleanup. It is for this reason that we became interested in enhancing phytoremediation using transgenic technologies."

Doty, along with bioremediation researcher Stuart Strand and colleagues, have created genetically engineered poplar trees in the laboratory that can remove as much as 91 percent of trichloroethylene—the most common groundwater contaminant at U.S. Superfund sites—from liquids. Unaltered plants removed 3 percent.

Both unaltered poplars and the genetically engineered variants produce enzymes that break down trichloroethylene. The modified poplars just generate a lot more of a key enzyme, and thus work far more quickly—breaking down the dangerous molecule into harmless byproducts roughly 100 times faster than normal plants.

"I personally find it exciting and gratifying that the plants remove carcinogens rapidly," Doty said.

Doty and her colleagues also found the genetically engineered poplars were better at removing chloroform, a hazardous byproduct of disinfecting water; carbon tetrachloride, a toxic solvent; and vinyl chloride, a carcinogenic substance used to make plastics. In addition, in air pollution experiments using 6-inch modified poplars in sealed containers, the plants were better at taking up gaseous trichloroethylene and benzene, a pollutant associated with petroleum.

"It is the first time that transgenic plants have been shown to remove airborne pollutants, providing a new approach to someday reduce the large threat posed by air pollution," Doty said.

Doty's collaborators, biotechnologist Neil Bruce at the University of York in England and his colleagues, have also created genetically engineered plants for phytoremediation. They have focused on the explosive known as RDX, which is toxic. RDX has led to widespread contamination of land and groundwater, and does not break down easily in the environment by itself.

The researchers discovered bacteria that could break down RDX by sifting through contaminated soil. They next isolated the genes responsible and plugged them into the weed known as thale cress, or Arabidopsis thaliana. Bruce and his colleagues found their plants cleaned up RDX significantly faster than regular plants.

"The plants break down RDX to nontoxic metabolites, for example nitrite, which the plant can use as a nitrogen source," Bruce explained. They next hope to develop poplars or grasses that bear these genes.

Doty and her colleagues plan to do additional experiments to ensure that plant tissues do not harm non-target organisms, such as bugs that might chew on them. They also want to see how effective such trees are when grown in soil—currently all their poplars are just cuttings several inches tall and growing in vials.

"As researchers we want to make sure such concerns are addressed and risks minimized," she said. "In the case of contaminated sites, we're already facing bad situations where the use of transgenic plants may reduce the known risks from carcinogens and other hazardous pollutants in the environment. Our ultimate goal is to provide a more rapid way to reduce the amount of carcinogens, one that is affordable so many sites can be treated."

Doty and her colleagues think the fact they chose poplars might help alleviate concerns that transgenic trees might get into regular forests. Poplars can grow for several years without flowering, at which time they could be harvested to prevent seeds from generating. And unlike some other kinds of trees, branches of the hybrid poplar being studied do not take root in soils when branches fall to the ground.

The findings were detailed online Oct. 15 in the Proceedings of the National Academy of Sciences.