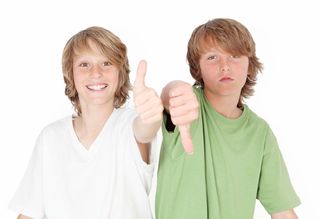 Whether you're naughty or nice may be determined by your genes.
(Image: © Brothers image via Shutterstock)

Many times, two siblings raised by the same parents, and subject to similar environmental influences, can turn out to be polar opposites: one kind and generous, the other mean-spirited. A new study reveals that the latter might simply have been dealt the wrong hormone receptor genes.

Oxytocin and vasopressin, two hormones that inspire feelings of love and generosity when they flood our brains, bind to neurons by attaching to molecules called receptors, which can come in different forms. The new research, led by psychologist Michel Poulin of the University of Buffalo, suggests that if you have the genes that give you certain versions of those hormone receptors, you're more likely to be a nice person than if you have the genes for one of the other versions. However, the researchers found that the genes work in concert with a person's upbringing and life experiences to determine how sociable — or anti-social — he or she becomes.

As detailed in a new article in the journal Psychological Science, hundreds of people were surveyed about their attitudes toward civic duty, their charitable activities and their worldview. They were asked, for example, whether people have an obligation to report crimes, sit on juries or pay taxes, whether they themselves engage in charitable activities such as giving blood or volunteering, and whether people — and the world as a whole — are basically good, or are threatening and dangerous. Of those surveyed, 711 people provided a sample of their saliva for DNA analysis, which showed which version of the oxytocin and vasopressin receptors they had.

Study participants who saw the world as a threatening place, and the people in it as inherently bad, were nonetheless nice, dutiful and charitable as long as they had the versions of the receptor genes associated with niceness. These "nicer" versions of the genes, Poulin said, "allow you to overcome feelings of the world being threatening and help other people in spite of those fears."

With the other types of receptor genes, however, a negative worldview resulted in anti-social behavior.

"The fact that the genes predicted behavior only in combination with people's experiences and feelings about the world isn't surprising," Poulin said in a press release, "because most connections between DNA and social behavior are complex." [Is Free Will an Illusion? Scientists, Philosophers Forced to Differ]

For oxytocin, the difference between having the "nicer" hormone receptor and the "less nice" receptor lies in a single DNA base pair located on the third chromosome. If you inherit two guanine base pairs — one from each parent — giving you a genotype represented by the letters GG, your cells build the "nicer" receptor. If you inherit an adenine base pair from either one or both parents, and have a genotype represented by either AA or AG, you land the "less nice" oxytocin receptor.

The percentage of people with each genotype varies greatly between ethnicities. "In European-American samples — so, white people in the U.S. — what you see is that the GG genotype represents about half of people, or a small majority. That's the population we studied in this paper," Poulin told Life's Little Mysteries. "Other research … indicates that the rates of GG or the so-called 'nice' genotype are much lower in East Asian populations. This is sparking an interesting discussion among psychologists about the roots of pro-social behavior. We know East Asian cultures are much more communal than other cultures. How do we explain that distinction?"

It could be that other genes, or other cultural factors, play a more significant role in molding communal behavior among East Asian people than their oxytocin receptors, Poulin said. "These are early days in figuring out the association between genes and pro-social behavior."

But the evidence is converging to point to a greater influence of genes on niceness than was previous assumed. For example, another study performed last year by scientists at the University of Edinburgh showed that identical twins, who share 100 percent of their genes, had much more similar attitudes toward civic duty and charitable activities than did fraternal twins, who had parallel upbringings but who share only 50 percent of their genes. With the new study, Poulin and his colleagues have identified the genes that they say "may lie at the core of the caregiving behavioral system."

"We aren't saying we've found the niceness gene," he said. "But we have found a gene that makes a contribution. What I find so interesting is the fact that it only makes a contribution in the presence of certain feelings people have about the world around them."

Having the "nicer" genes may benefit you, as well as those around you. According to the scientists, "Some research has indicated that behavior aimed at helping other people is a better predictor of health and well-being than are social engagement or received social support." In other words, helping others makes you healthier — even more so than being helped yourself.