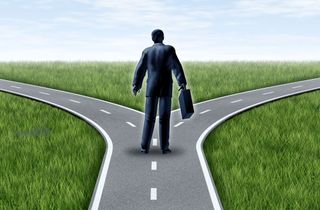 Are you in charge of the choices you make, or are your brain cells?
(Image: © Fork in the road image via Shutterstock)

Are you really in control, or is your every decision predetermined? Who's at the steering wheel: you, your genes, your upbringing, fate, karma, God?

A hot topic for several thousand years, the question of whether free will exists may never be settled to everyone's satisfaction. But in a series of new articles for the Chronicles of Higher Education, six academics from diverse fields offer fresh perspectives from the standpoints of modern neuroscience and philosophy. Ultimately, they voted 4-2 in favor of the position that free will is merely an illusion.

The four scientists on the panel denied the existence of free will, arguing that human behavior is governed by the brain, which is itself controlled by each person's genetic blueprint built upon by his or her life experiences. Meanwhile, the two philosophers cast the dissenting votes, arguing that free will is perfectly compatible with the discoveries of neuroscience.

Jerry Coyne, an evolutionary biologist at the University of Chicago, defined free will as the possibility that, after making a decision, you could have chosen otherwise. But a "decision," Coyne argues, is merely a series of electrical and chemical impulses between molecules in the brain — molecules whose configuration is predetermined by genes and environment. Though each decision is the outcome of an immensely complicated series of chemical reactions, those reactions are governed by the laws of physics and could not possibly turn out differently. "Like the output of a programmed computer, only one choice is ever physically possible: the one you made," Coyne wrote.

The three other scientists concurred with Coyne's viewpoint. As Owen Jones, a professor of law and biological sciences at Vanderbilt University, put it in his essay: "Will is as free as lunch. (If you doubt, just try willing yourself out of love, lust, anger, or jealousy)."

Though everyone must be held accountable for his or her actions, neuroscience and the nonexistence of free will should be factored into some criminal cases, the scholars argued. [Math Formula May Explain Why Serial Killers Kill]

A counterargument came from Hilary Bok, a philosopher at the Johns Hopkins University, who said scientists misunderstand the question of free will when they argue that decisions are governed by the activity of brain cells. Free will, in her opinion, is being capable of stepping back from one's existing motivations and habits and making a reasoned decision among various alternatives. "The claim that a person chose her action does not conflict with the claim that some neural processes or states caused it; it simply redescribes it," she wrote.

Alfred Mele, another philosopher at Florida State University, also believes the concept of free will is compatible with the findings of neuroscience. He cited a 2008 study in which volunteers were asked to push either of two buttons. According to the study, brain activity up to 10 seconds before the decision was consciously reached revealed which button the volunteer was more likely to press.

Though the study is widely viewed as evidence against free will, Mele pointed out that the study participants' brain activity accurately predicted their eventual decision only 60 percent of the time. In his view, this suggests people can consciously choose to override their brains' predispositions.

Therefore, he wrote, "I do not recommend betting the farm on the nonexistence of free will."