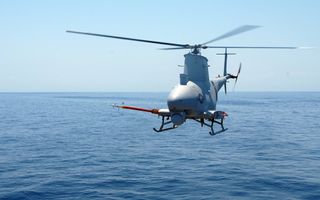 Helicopter drones that have already helped catch cocaine smugglers at sea could soon get much smarter about hunting modern-day pirates. The U.S. Navy plans to upgrade its robotic Fire Scouts with electronic "brains" that are able to automatically recognize small pirate boats spotted through 3D laser imaging.

The Fire Scout drones would bounce millions of laser pulses off distant objects to create a 3D "radar" image of any boats on the high seas — a technology known as LIDAR or LADAR — so that their new software could automatically compare the 3D images to pirate boat profiles on record. A first test is scheduled to take place with seven small boats off the California coast this summer.

"The automatic target recognition software gives Fire Scout the ability to distinguish target boats in congested coastal waters using LADAR, and it sends that information to human operators, who can then analyze those vessels in a 3D picture," said Ken Heeke, program officer in the Office of Naval Research's Naval Air Warfare and Weapons Department.

U.S. military analysts already suffer from serious information overload on modern battlefields, given the huge amounts of data collected by military sensors and drones. Having smarter robotic helicopters could ease the workload strain for Navy sailors, who must otherwise eyeball the data coming from the new Multi-Mode Sensor Seeker (MMSS) — a sensor mix of high-definition cameras, mid-wave infrared sensors and the 3D LADAR technology.

"Infrared and visible cameras produce 2D pictures, and objects in them can be difficult to automatically identify," said Dean Cook, principal investigator for the MMSS program at the Naval Air Warfare Center Weapons Division. "With LADAR data, each pixel corresponds to a 3D point in space, so the automatic target recognition algorithm can calculate the dimensions of an object and compare them to those in a database."

Such LIDAR/LADAR technology has also interested other branches of the U.S. military. U.S. Special Forces helicopters could use LADAR to create 3D maps of the battlefield in bad weather conditions and avoid deadly crashes during attempted landings. The "AlphaDog" robot has also used such technology in early testing as a robotic battlefield mule for U.S. Marines.

Meanwhile, the Navy has begun testing other new technologies to tackle the problem of piracy — an especially thorny issue because of Somali pirates attacking ships off the coast of East Africa. Its more forceful countermeasures include a combination of lasers and machine guns, as well as swarms of smart rockets capable of picking out their own small boat targets.