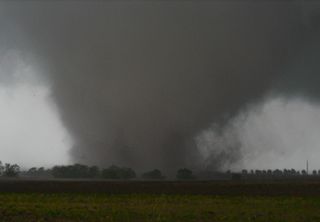 A large tornado touches down near Dallas on April 3, 2012.
(Image: © Brandon Sullivan - StormChasingVideo.com/TornadoTitans.)

An estimated 10 to 18 tornadoes plowed through the Dallas metropolitan area yesterday afternoon (April 3), tossing semi-trailers high in the air, destroying homes and pelting the region with hail the size of golf balls.

The storms sent thousands of people scurrying for cover. But Brandon Sullivan was hurrying in the opposite direction — straight toward the Dallas twisters. He'd been watching radar and weather reports all morning, and drove all the way from his home in Oklahoma City in search of the telltale rotating clouds.

His chase was rewarded. Just outside Forney, Texas, a town about 20 miles (32 kilometers) east of Dallas, Sullivan stopped his car along a tiny dirt road as a furious tornado churned in a field just about 200 yards (180 meters) away.

He got out his camera and started rolling just as the tornado touched down, ripping out power lines and sending bright crackles of electricity flashing high into the sky. [Images: Today's Dallas Tornadoes]

"The tornado actually almost stopped and almost started moving back toward me," Sullivan told OurAmazingPlanet. "So there was a pretty intense moment when I started backing up this dirt road really quick just to avoid it."

The footage was featured on many national television outlets across the country.

The 20-year-old University of Oklahoma meteorology student says he had a childhood fear of tornadoes, but somewhere along the way that fear morphed into a deep fascination.

"When I'm this close to a tornado, I feel more in control than if I were hiding in a basement," Sullivan said. "When you're that close you can really take in all the power and see where it's moving, versus if you're far away."

It should be noted that only experts should ever chase tornadoes. Last year's high death toll is a testament to the storms' destructive power; tornadoes killed 550 people in 2011, making it one of the deadliest tornado years on record.

Sullivan has been chasing storms since he was 14, when he'd tag along with other severe weather junkies. Now, he has his own car, equipped with wireless Internet and radar, allowing him to accurately stalk developing storms.

Although this week's tornado was the first one Sullivan has caught this year, the 2012 tornado season has already been a busy one. In early March, a month's worth of tornadoes struck the Midwest in a single day, killing dozens of people.

And although the Dallas tornadoes left the area ravaged, injuring more than a dozen people, including two seriously, no fatalities have been reported so far.

Sullivan said that is a testament to effective communication between the National Weather Service, storm spotters, emergency managers and the public, since millions of people live in the area where the tornadoes hit.

"I just find that amazing that there was no loss of life so far," he said. "That's a really good step in the right direction."