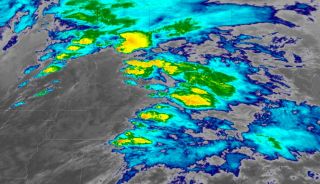 This high resolution infrared imagery of the severe weather outbreak was taken around noon on March 2, 2012. Yellow, orange, and red areas indicate the coldest, highest cloud tops. By pairing precise color scales with this high resolution imagery, meteorologists can weed out the extraneous cloud information and focus on the most threatening features in this massive storm system. Major connective storm outbreaks can be seen dotting the Midwest in this image.
(Image: © NOAA)

In what may be the biggest daily tornado outbreak on record for March, an entire month's worth of twisters struck in a single day.

The nation's Storm Prediction Center received 81 reports of tornadoes yesterday (March 2), according to data filtered to remove duplicate reports of tornadoes. For the entire month of March, the 10-year average number of tornadoes is 87, according to the Weather Channel's severe weather expert Greg Forbes.The National Weather Service's storm survey teams have not yet confirmed the tornado reports, so these numbers could change. But if the numbers hold, the outbreak could go down as the largest single-day outbreak in March history.

But today, the focus is on recovery efforts, said Craig Fugate, the director of the Federal Emergency Management Agency. Figuring out where this outbreak ranks among other huge outbreaks will wait for another day.

At least 33 people died during yesterday's severe weather, according to news reports. In Kentucky, at least 17 people died. A suspected EF-4 twister, the second highest strength on the tornado damage scale, hit Indiana, where at least 14 died.

The overnight outbreak came just after other storms had raked the Midwest earlier in the week. A deadly tornado outbreak on Leap Day roared through Kansas, Nebraska, Illinois, Indiana, Missouri, Kentucky and Tennessee. The severestorms killed at least 12 people and included an EF-4 twister in Harrisburg, Ill., a rarity for February.Many areas hit earlier in the week, such as West Liberty, Ky., saw round two yesterday. Some other areas, including Huntsville, Ala., were also hit nearly 10 months ago during the April 27 outbreak, the largest tornado outbreak in recorded history (tornado recordkeeping began in 1950).

In 2006, the biggest March outbreak saw 105 tornadoes from March 9 to 13. March 12 of that outbreak saw 62 confirmed tornadoes. Yesterday's outbreak could top that total.

While the main tornado season runs from spring to early summer, this year's early outbreaks show that tornadoes can form under a variety of conditions and strike during fall and winter, too. This year's mild winter and warm start to meteorological spring has upped the risk of dangerous storms.

Also behind this week's twisters is a low-dipping jet stream, which is bringing cold air from Canada to mix with the warm, moist air from the Gulf of Mexico. Where these two differing air masses meet is often an area of severe weather, hail, winds and even tornadoes.

The outbreak is not finished. Already today one tornado has been reported in southwest Georgia as severe weather continues to move across south Georgia and north Florida, including parts of the panhandle.