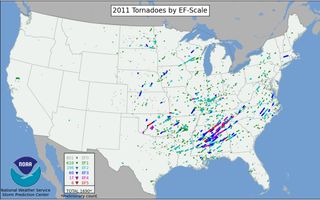 The tornadoes of 2011, ranked their strength on the tornado damage scale. Will we see a repeat this year?
(Image: © SPC)

Tornado season got an early start this year, and according to one forecast, it could be an ominous sign of things to come.

Tornado season typically starts in late March and revs up from May to June, though it's possible for tornadoes to pop up during any time of the year (November is often called the second tornado season). After 2011's record-breaking tornado season, and this year's early start, people in Tornado Alley and Dixie Alley might be wondering if they're in for another big bout of twisters.

There is no official forecast for tornado season like there is for hurricane season because the smaller, more localized storms are too difficult to predict, but the conditions are in place for a busy season this year, according to AccuWeather.com's tornado season outlook.

Already this year, tornadoes have caused widespread distruction. Last night (March 15), reported torandoes roared through Michigan, damaging more than 100 homes. A month's worth of tornadoes struck on March 2, when more than 30 people died during an outbreak of severe weather, according to news reports.

The March outbreak came just after other storms had raked the Midwest earlier in the week, in the last few days of February. A deadly tornado outbreak on Leap Day roared through Kansas, Nebraska, Illinois, Indiana, Missouri, Kentucky and Tennessee. The severe storms killed at least 12 people and included an EF-4 twister in Harrisburg, Ill., a rarity for February.

The atmospheric conditions that fueled these outbreaks — warm weather and a low-dipping jet stream — are still in place, which could mean that the early outbreaks are a preview of things to come, Smerbeck told OurAmazingPlanet.

Spring is a transitional period, when masses of warm and cool air are more likely to collide and create the thunderstorms that spawn tornadoes. Tornadoes form where warm, moist air is trapped underneath a layer of cold, dry air. The strongest tornadoes often form when the wind about 10,000 feet (3,000 meters) above the ground blows in a different direction than the surface wind. In the spring, warm air rising in the storm system encounters this wind shear and is pushed into a horizontal motion, creating a strong rotation. [Infographic: How, When & Where Twisters Form]

Bringing the cold air to the South and Midwest is a low-dipping jet stream. The jet stream is being forced south by a weak La Niña climate pattern, Smerbeck said. La Niña is a naturally occurring climate phenomenon that results from interactions between the ocean surface and the atmosphere over the tropical Pacific Ocean. During La Niña, cooler-than-average Pacific Ocean temperatures influence global weather patterns.

Meanwhile, the water temperatures in the Gulf of Mexico are above average, which creates warm, moist air flowing north. Where these two differing air masses meet is often an area of severe weather, including hail, winds and even tornadoes.

Smerbeck said that another outbreak could be in the works for the Southeast in the coming weeks, including the Tennessee Valley and the Lower Mississippi Valley. Then the tornado threat will shift to the northeast going into summer.