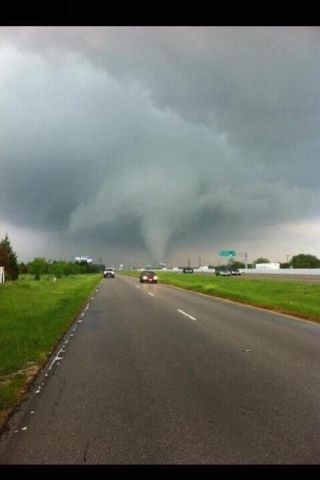 In a scene straight out of a blockbuster disaster movie, big-rig trucks were tossed high into the air like toys when huge tornadoes slammed into Dallas yesterday (April 3). The National Weather Service said today that the damage in Texas, which included hundreds of homes, suggested one of the twisters was an EF2, meaning the winds gusted between 111 and 135 mph (179-217 kph).

Videos of the truck-tossing tornado have been seen by millions, leaving many to wonder: How exactly can a tornado pick up tractor-trailers and lift them into the air?

“Tornadoes have two means of picking up vehicles,” said Fred Haan, a professor of mechanical engineering at Rose-Hulman Institute of Technology in Indiana, who has worked on tornado simulations for about a decade.

The first thing that allows them to lift trucks, he said, is that tornadoes generate a serious amount of updraft suction in their cores. This helps to pick things up and get things moving a little. Second, they generate significant amounts of vertical velocity near the core. Instead of having wind blowing in a straight line as with most storms, the three-dimensional nature of tornado wind makes some strange things possible, including picking up vehicles and dropping them in weird places. [Why Aren't There Tornado Safety Building Codes?]

Tornadoes are weird at their core, says Haan. Because of the massive amount of energy, things tend to be chaotic. “One of the things that I haven’t come up with a good answer for is why something gets picked up and another thing doesn’t. We can have a model we test 20 to 30 times, and only two of the times will a vehicle get picked up in the air and fly,” he told Life's Little Mysteries.

Despite the inherent unpredictability of tornadoes, Haan said he can surmise one thing about the trucks: They were probably empty. One of the things he sees in the simulations is that if a vehicle is heavier in one spot — say, it has a heavy engine in the front, or a long empty shell in the rear — then it’s easier for the tornado to flip and fling it. “If there is an imbalance, one end will get picked up off the ground, and I have a hunch that’s what happened.”