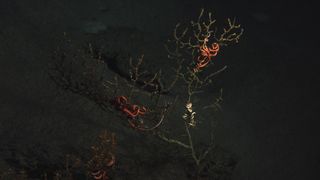 Researchers led by Penn State University Biologist Charles Fisher used a wide range of underwater vehicles, including the research submarine Alvin, as well as comprehensive chemical-analysis techniques to determine precisely the source of the petroleum hydrocarbons they found on the corals. A portion of one of the impacted corals and two attached brittle starfish. Living tissue is orange and most of the skeleton is bare or covered by brown flocculent material. The brittle starfish are normal symbiotic partners of this type of coral. The brittle star on the left shows a more normal coloration for this species and the individual on the right is bleached white and much more tightly wrapped around the branch than normal. Both starfish were uncharacteristically immobile.
(Image: © Lophelia II 2010; NOAA OER and BOEMRE)

Nearly two years after the Deepwater Horizon drilling rig blowout, researchers have uncovered a hidden casualty of the resulting massive oil spill: a cluster of coral near the well covered in brown goo.

The deep-sea corals, which sit 6.8 miles (11 kilometers) southwest of the Macando well site where the spill occurred, were first seen in October 2010 during a research expedition in the Gulf of Mexico. Unlike corals farther from the well, these colonies showed signs of damage.

"As soon as the ROV [remotely operated vehicle] got close enough to the community for the corals to come into clear view, it was clear to me that something was wrong at this site," said Pennsylvania State University biologist Charles Fisher, who led the research expedition. "I think it was too much white and brown, and not enough color on the corals and brittle stars. Once we were close enough to zoom in on a few colonies, there was no doubt that this was something I had not seen anywhere else in the Gulf: an abundance of stressed corals, showing clear signs of a recent impact. This is exactly what we had been on the lookout for during all dives, but hoping not to see anywhere."

Hard corals like these are composed of teensy animals called coral polyps that build their rocky reefs, or skeletons, out of the water's calcium carbonate. In order to survive, the polyps depend on algae called zooxanthellae that live within their tissues; the algae also give the corals their colorful appearances.

In exploring the approximately 1,291-square-foot (120-square-meter) area of coral, the team saw polyp tissue loss, bleaching (when the zooxanthellae die due to some stress, leaving "white" coral skeletons behind) and excessive mucus and a strange brown material coating the colonies. Individual coral polyps were retracted into their exoskeletons, a response seen in these animals due to exposure to crude oil.

The Macando well blew out on April 20, 2010, and it took three months to contain the oil leaking from a broken riser pipe at the well. During that time, government scientists estimate that about 4.9 million barrels of oil — or about 205 million gallons — gushed into the Gulf of Mexico. [Deepwater Horizon: Images of the Impact]

Exploring the Gulf in October 2010, Fisher and his colleagues found no evidence of damage to coral colonies more distant than about 12 miles (20 km) from the well site. Closer to the well site, on the last dive of their three-week research trip, they found the damaged community on the seabed 4,495 feet (1,370 meters) deep.

Back ashore, the researchers scrambled to put together a second trip to the site, and in an unusually fast turnaround, made it back to the coral colonies in December 2010. This time, they used both an autonomous underwater vehicle and the three-passenger submersible Alvin to explore the coral. With its robotic arm, Alvin was able to collect samples of the coral as well as the brown tufts of oily material from the colonies.

Oil seeps naturally out of crevices in the Gulf, so researchers employed a bit of chemical detective work to determine where the oily stuff on the coral came from. Using Alvin's samples, the scientists were able to separate the compounds in the oil by molecular weight and compare the molecular makeup with oil collected from the Macando leak as well as from the ocean surface and salt marsh spill sites.

The results strongly suggest the oil on the coral did, in fact, come from the Deepwater Horizon spill, the researchers report this week in the journal Proceedings of the National Academy of Sciences.

"These findings will have a significant impact on the location of deep-water drilling and the monitoring of oil spills in the future," said study researcher Helen White of Haverford College in Pennsylvania. "Ongoing work in the Gulf will improve our understanding of the resilience of these isolated communities and the extent to which they are affected by human activity. Oil had a visible effect on these corals, and it is important to determine if they can rebound."