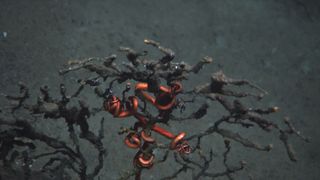 The sea fan Paramuricea sp. with the symbiotic brittle star Asteroschema sp. from a site in the Garden Banks region of the Gulf of Mexico. This apparently healthy coral was observed during the first leg of the cruise at approximately 360 meters depth and over 450 km away from the site of the Deepwater Horizon. Photo
(Image: © Lophelia II 2010, NOAA OER and BOEMRE)

"It reminds me of going to a family funeral," said Charles Fisher, a biology professor at Penn State University, and chief scientist on a recent mission to study the impact of the Gulf oil spill on coral in the area.

Just like seeing extended family, "it's always fun to go into the deep sea, and we saw a lot of life," he said. "But, on the other hand the reason you're there is not a happy reason. Some corals have been severely slimed. Some are dead or dying."

The Woods Hole Oceanographic Institution in Woods Hole, Mass., led a nine-day mission this month to study the effects of the oil spill on life at the bottom of the sea. A team of scientists set out on a research vessel, spending just over a week in the middle of the Gulf of Mexico.

Equipped with both an autonomous submarine called Sentry, as well as a submersible called Alvin, the scientists photographed, mapped and collected samples from the Gulf nearly 24 hours a day. They completed six dives on Alvin, and set up a camera near the site of a dying coral reef, which will snap photos every hour for the next two months monitoring the coral's heath.

A typical day on the ship actually began the night before, Fisher told OurAmazingPlanet. The scientists would program and launch the robot Sentry, which would scout the area, returning sometime between 2 a.m. and 6 a.m. After collecting Sentry, the scientists would then go through the data collected, and make the final preparations for the human dive in Alvin.

Around 8 a.m., Alvin's pilot and two scientists would climb aboard the 6-foot-wide (1.8 meters) sphere within the submersible and begin their hour-and-a-half-long descent to the seafloor.

The next six or so hours were spent on the seafloor collecting samples and taking photos, and then the scientists would surface around 5 p.m., just in time to begin the night's work.

The expedition follows on the heels of an earlier cruise in which many of the same scientists found dozens of coral species 7 miles (11 kilometers) from the spill site that appeared to be dead or dying. The scientists revisited that same site, looked for other coral reefs, and took photos and samples from both the sick coral as well as another colony of reefs that appeared healthy.

"I probably had the happiest experience on the cruise," said Chris German, chief scientist for deep submergence at Woods Hole. "I got to see the healthy coral."

More disheartening were the damaged and dying corals coated with a brown gooey substance. While German said the team was refraining from making any conclusions about the source of the brown goo before the analysis was complete, he said, "it doesn't look like it's part of the natural system."

The coral were "covered in brown goop that we haven't seen anywhere else," German said, describing the site as a "smoking gun" that may be representative of other impacted coral communities.

German said that the coral coated in brown goop was about 7 miles southwest of the spill site. Based on the ocean currents and the dynamics of the gushing oil, scientists were able to predict where the oil plume was likely to spread. The dying coral was found in that area, while the healthy coral — discovered about 15 miles (24 km) southeast of where the rig exploded — was likely out of range of the plume, German said.

The next step is to analyze both the dying and healthy coral and determine definitively whether the brown goop covering the dying coral is in fact oil from the spill. Scientists will be doing molecular, chemical and genetic analyses to try and determine whether there are unseen impacts as well, such as from the chemical oil dispersant Corexit. And in two months, the researchers will collect the camera monitoring the dying coral to see how the organisms have changed.

Fisher said the team will also continue to look for other coral communities. "We don't know what's in the most of the Gulf," he said. "Just in this one area, the corals we found, the impact was severe. We saw a lot of completely dead corals. A few were doing well, but most were severely impacted."

This article is provided by OurAmazingPlanet, a sister site of LiveScience.