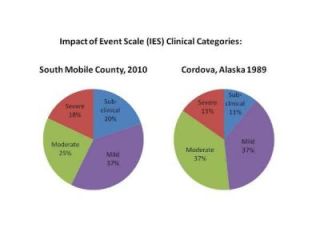 A comparison of oil spill-related psychological distress among residents of south Mobile County, Ala., in 2010, and Cordova, Alaska, in 1989.
(Image: © courtesy of Liesel Ritchie, Duane Gill and J. Steven Picou)

The Deepwater Horizon disaster, which began a year ago, has placed psychological stress on some Gulf residents similar to that experienced by Alaskans in the wake of the Exxon Valdez oil spill more than 20 years ago.

After the explosion aboard the Deepwater Horizon rig caused oil to gush into the Gulf of Mexico, a survey of residents of south Mobile County, Ala., revealed psychological stress similar to what befell residents of the fishing town of Cordova, Alaska, after the oil tanker the Exxon Valdez ran aground in 1989. [Infographic: Anatomy of the Oil Spill]

The results were based on responses from 412 adults who had lived within the Mobile area for at least a year. The random telephone survey was modeled on research done after the Exxon Valdez spill, which hit Cordova hard.

Conducted in September 2010, the Alabama survey found close to half of residents were experiencing moderate to severe stress; after the Exxon Valdez disaster, more than half of Cordova's residents were in this category.

If trends seen at Cordova continue to hold true for Mobile County, these Gulf Coast residents can expect to feel significant spill-related stress over the next decade, the researchers, led by Duane Gill of Oklahoma State University, concluded.

Four out of 10 Alabama residents reported a commercial connection to the coast, and not surprisingly, those with a connection to resources that had been damaged or were threatened reported higher levels of stress. Meanwhile, 66 percent reported that the spill had had negative economic consequences on their households.

"Given the social scientific evidence amassed over the years in Prince William Sound, Alaska, we can only conclude that social disruption and psychological stress will characterize residents of Gulf Coast communities for decades to come," the researchers concluded.

The study will be published in future issues of the journals American Behavioral Scientist and Contexts.