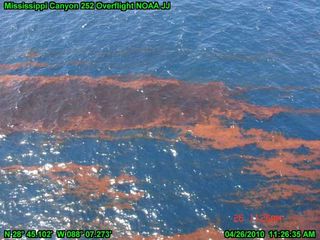 Even after weeks of spilling crude into the sea, the Gulf oil spill remains remarkably fluid, with size estimates and plans for containment changing almost daily. Meanwhile, the event has generated its fair share of odd containment attempts and other offbeat situations.

So said Admiral Thad Allen, commandant of the U.S. Coast Guard, on CBS' "FaceThe Nation." Called a "junk shot," the engineers would have used the garbage to plug holes in the automatic safety system that should have capped the well as soon as the pipes broke.

2. Human and animal hair stuffed into nylon stockings can contain and soak up the oil spill.

That's according to the nonprofit organization Matter of Trust, which has started a hair drive among barber shops and pet stores, and has already sent hundreds of thousands of pounds of hair wrapped in recycled nylon stockings down to the Gulf to help contain the spill.

3. Unlike the oil gusher, any lawsuits against BP would be capped.

The 1990 Oil Pollution Act ensures that a civil suit cannot find BP liable formore than $75 million, excluding the cost of the cleanup. However, on May 5, Representative Rush Holt (D-NJ) introduced a bill to the House of Representatives that would raise the maximum penalty for an oil spill to $10 billion. As of now, the bill remains in committee.

BP, and Transocean, which owned the downed oil rig, possessed insurance that largely protects them from any losses resulting from the spill, the Associated Press and Reuters reported. That payout will negatively affect the insurance industry, though, which may face record losses as a result of the spill, Bloomberg News reported.

5. The containment dome failed because it floated.

It filled up with slushy-like crystals, Doug Shuttles, a chief operating officer with BP, said in May 12 press conference. The crystals, made from a substance called methane hydrates, made the containment dome — intended to cap the spill —too buoyant to staunch the flow of oil. The hydrates formed when natural gas escaping from the broken pipe reacted with sea water, Shuttles said.

6. Natural gas is also spilling out of the pipe, along with the oil.

On May 11, BP confirmed that the broken pipe began spilling natural gas into the sea, but noted that a leak of oil and gas might be easier to fix than a pure oil leak, ABC News reported. A day later, BP released a video of the oil rig's broken pipe venting natural gas along with the oil.

7. Cleaning up is dangerous work.

Even though the oil itself is harmless to humans, the work is risky, Gerald Graham, president of World Ocean Consulting, a marine oil spill prevention and response planning firm based in British Columbia, said in a telephone interview.The danger comes from a variety of heavy equipment used in the cleanup, the ability of the oil fumes to knock someone unconscious and the general risk of performing complex operations at sea, Graham said.

Not all the news is bad, however:

The rig tapped a finite source of oil and gas.

That means the leak will eventually grind to a halt without human intervention, Graham said. Although widely varying estimates about the size of the reservoir and the rate of seepage makes it impossible to estimate how long that will take, the spill will eventually peter out, Graham said.

The oil will not stay in the environment indefinitely.

Most of it will evaporate or dissipate within days, LuAnn White, a professor of environmental health and toxicology at Tulane, told LiveScience. However, the small percentage that does remain will affect local wildlife for years, especially shellfish, White said.