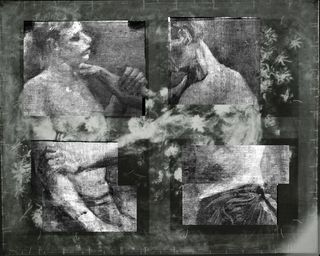 Composite of X-ray of selected areas of the painting, showing the image of two half-naked wrestlers under the flowers. The image indicates that the painting was originally made by van Gogh at art school in Antwerp
(Image: © Kröller-Müller Museum)

X-rays have illuminated the origins of a disputed painting: This time, an old still life by Vincent van Gogh. Suggestions that the image was painted by Van Gogh had been dismissed in 2003, but new research now gives greater weight to the idea that the Dutch post-impressionist painter created the work.

The painting is about 40 inches (100 centimeters) by 30 inches (80 centimeters) and dates back to 1886. It shows a variety of flowers in a sea-foam green vase on a table, with another bouquet in front, and is titled "Still Life With Meadow Flowers." Beneath this still life, scientists discovered in 1998 another painting, one showing two men wrestling.

The authenticity of the painting has been in doubt since it arrived at the Kröller-Müller Museum in the Netherlands in 1974.

The new analysis leaves "no doubt that the wrestlers and the flower still life were painted by Van Gogh," the museum said in a statement. "The flower piece will [now] be given a prominent position among other works by Vincent van Gogh in the museum's collection."

Doubters said that the painting's unusual size (larger than Van Gogh's typical flower paintings) and the odd signature (in the upper right corner, instead of the bottom right) weren't reminiscent of a true Van Gogh, and in 2003 the artist was labeled as anonymous. It wasn't until scientists got their hands on the painting that evidence began to mount that the work was by Vincent van Gogh.

Historians from the museum say the work's size was actually standard for figure paintings at the Art Academy at Antwerp, Belgium; and it was there that he painted the under-painting, a "figure painting."

An X-ray image of the painting in 1998 revealed two wrestlers grasping each other by the arms — the original image Van Gogh painted while at the academy.

The over-painting is a still life of flowers, which Van Gogh painted in Paris later that year using the same canvas. He didn't bother to scrape off the old image or to even paint an intermediate layer: he painted right over it.

"The still life was painted in at least three stages with drying time in between, but the boundaries between the stages cannot be determined precisely," the museum told Reuters. "The upper part was painted first and from life, according to the flower season most likely at the beginning of June (1886) at the earliest."

Because of the under-painting, the researchers said, the artist also had to pay special attention to cover over the old images. Unlike Van Gogh's other Parisian flower paintings, this image has an extra bouquet in the foreground, covering the area of one man's torso.

The new work, using a technique called Macro Scanning X-ray Fluorescence Spectrometry, or MA-XRF, helped the researchers analyze both the under-painting and the top layer of the work in much finer detail than the original scan. The X-rays don't harm the artwork, but data gathered from them give a detailed picture of individual paints and pigments, which reflect the rays back in different ways.

The new scan shows that the pigments used in the paintings were very similar to the pigments Van Gogh used in other paintings during the period. The detail was so fine that the painter's typical brush strokes are also visible, enabling the researchers to suggest that maybe it is a Van Gogh after all.

The new scan also showed that the male models in the original wrestling painting were posed half naked, which is characteristic of the academy in Antwerp, the museum said. Van Gogh wrote to his brother about painting the original while at school: "This week I painted a large thing with two nude torsos — two wrestlers."