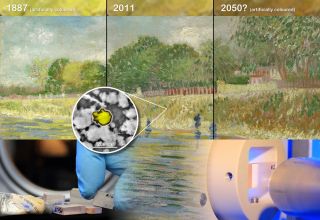 This illustration shows how X-rays were used to study why van Gogh paintings lose their shine. Top: a photo of the painting "Banks of the Seine" on display at the Van Gogh Museum, divided in three and artificially colored to simulate a possible state in 1887 and 2050. Bottom left: microscopic samples from art masterpieces molded in Plexiglas blocks. The tube with yellow chrome paint is from the personal collection of M. Cotte. Bottom right: X-ray microscope set-up at the ESRF with a sample block ready for a scan. Center: an image made using a high-resolution, analytical electron microscope to show affected pigment grains from the van Gogh painting, and how the color at their surface has changed due to reduction of chromium. The scale bar indicates the size of these pigments.
(Image: © ESRF/Antwerp University/Van Gogh Museum)

"This type of cutting-edge research is crucial to advance our understanding of how paintings age and should be conserved for future generations," said Ella Hendriks of the Van Gogh Museum Amsterdam, where the two Van Gogh paintings studied are on display.

The yellow pigment, used by Van Gogh and his contemporaries, has been undergoing a chemical reaction when exposed to ultraviolet light (including sunlight) that turns the outer layers of the painting brown. The yellow pigment is called chrome yellow, and in a thin layer where the dried paint meets the surface varnish, sunlight penetrates the top layer of the paint. This sunlight triggers a chemical reaction that turns the bright yellow into a dirty brown.

The research team, which included Koen Janssens of Antwerp University in Belgium and Letizia Monico of Perugia University in Italy, discovered that the change was caused when the chromium in the yellow paint was reduced (meaning it gained electrons) from chromium (VI) to chromium (III), changing the color of the pigment.

Not all of the paintings from this period seem to undergo this change in the same time frame. Some haven't been darkened at all. Different painters used different pigments and switched over time, especially since chromium yellow is toxic, so the researchers had to track down some historical paint samples to test.

They found three such tubes of yellow paint and artificially aged the paint by exposing it to 500 hours under a UV lamp. Only one of the paint samples turned brown, one belonging to Flemish artist Rik Wouters. The color change was similar to that seen in the Van Gogh painting, and with X-ray analysis the researchers pinpointed the change to the chromium reduction.

To check that this is what happened to the actual paintings, the researcher took samples from Van Gogh's "View of Arles with Irises" and "Banks of the Seine" and analyzed the pigments. Though the multicolored samples were difficult to analyze, researchers

are confident that they likely underwent the same chromium reduction as the artificially aged samples.

"Our next experiments are already in the pipeline. Obviously, we want to understand which conditions favor the reduction of chromium, and whether there is any hope to revert pigments to the original state in paintings where it is already taking place," Janssens said in a statement.