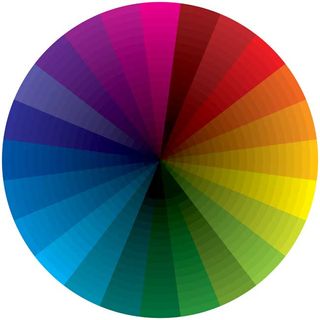 Most people learn about these pairs of opposite hues by looking at the color wheel, where red lies directly across from green, and yellow lies across from purple. But one scientist says that definition of complementary colors is misguided.
(Image: © Stockxchng.)

WASHINGTON – From some perspectives, art and physics seem to be two completely unrelated ways of seeing the world. Yet the two disciplines sometimes intersect with fascinating results, including computer-coded sculptures and even a new color wheel.

Jim Sanborn is an artist who creates sculptures based on science. He is perhaps best known for Kryptos, a work that stands before the entrance of the Central Intelligence Agency (CIA) headquarters in Langley, Va. The sculpture includes four sections of encrypted code messages that CIA employees and amateur cryptologists alike have devoted hours to solving; one remains a mystery.

"The uncracked part has remained uncracked for 20 years and I hope will remain uncracked after my demise," Sanborn said Saturday here at a meeting of the American Physical Society.

The sculpture played a role in the 2009 bestselling novel "The Lost Symbol" by Dan Brown.

Sanborn has also made artwork based on magnetism, uranium fission and the quest to build the first nuclear bomb.

"I call myself a nonfiction artist," Sanborn said. He described his artistic work as "making an invisible force visible."

He was joined on a meeting panel by Pupa Gilbert, a biophysicist at the University of Wisconsin-Madison. She comes at the subject from the opposite perspective, as a scientist who studies art through physics. She is the author of the recent book "Physics in the Arts" (Academic Press, 2008), which sheds light on topics in art from a scientific point of view.

"Art is the highest form of communication that human beings have," said Gilbert, who is also a painter. "I'm interested in how humans perceive things."

Gilbert used spectroscopy, which is a technology for breaking light into its constituent wavelengths, or colors, to show that the complementary pairs we learned aren't real physical complements. True complementary colors are two colors whose combined wavelengths spanr the whole visible spectrum, creating white. Red and green light don't add up to white, but red and light blue, or cyan, do.

"The complementary color of red is not green, it's cyan," Gilbert said.

The final member of the panel, Felice Frankel, a senior research fellow at Harvard University, argued that art and physics need to meet more often. She is testing a program at MIT called "Picture to Learn," which prompts students to create drawings from the concepts they learn in lectures and texts.

"We believe that this process of making a representation clarifies your thinking," Frankel said. Even experts can help solidify their understanding of scientific concepts by visualizing and illustrating them, she said. And presenting science visually can provide an accessible entryway to science for non-scientists.

"It's a means of getting the public to not be so intimidated by science," she said. "The whole world should love science. Everything around us is science, and people don't even know it's science.”

Frankel also took a series of photographs to illustrate the world on a very small scale for the recent book "No Small Matter: Science on the Nanoscale," (Harvard University Press, 2009) co-authored by Harvard scientist G. M. Whitesides.