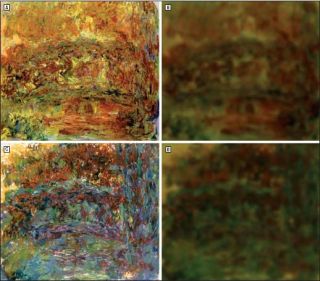 Images A and C show two of Monet's "The Japanese Bridge at Giverny" (1918-1924/Musee Marmatton, Paris) from around the time when his vision was at its worst. Images B and D respectively show the two paintings as they might have appeared to Monet through his cataract. The oranges and blues of the two paintings become almost indistinguishable.
(Image: © Archives of Ophthalmology/Musee Marmatton/Michael Marmor)

Claude Monet's paintings diffuse into nothing more than a fuzzy riot of color when viewed too closely. Ironically, the impressionist's vision got cloudy late in life, and his whole world blurred like, well, like a Monet. Now scientists have recreated the world as Monet saw it.

The new perspective reveals how the painter's failing vision might have affected his work.

Using historical accounts, Stanford ophthalmologist Michael Marmor estimated the artist's level of impaired vision and with a computer, applied blur and color variation to match the different stages of his declining eyesight, transforming the varied colors of the Monet’s “Japanese Bridge” into dark and muddy shades of yellow-green.

Marmor also performed the same analysis on works by Edgar Degas, who suffered from an eye disease that warped his central vision.

“What is new in this work is to actually show what that meant to them, and I don’t think it’s been appreciated ever in the past, really how this visual loss affected their perception of their own work,” Marmor said.

Monet, for whose work fine variations in color were a hallmark, often expressed his frustration to friends and family as his vision failed between 1912 and 1922.

“He wrote letters to friends, how colors were getting dull, and it was hard to tell them apart, and how he had to label tubes of paint,” Marmor said. “He was very vocal about how his failing eyesight was affecting him.”

Eye doctors at the time recognized that Monet had cataracts, which cause the lens of the eye to become denser and more yellowish over time. This change blurred the distinctions between colors for Monet and lessened their intensity.

“So his vision was becoming progressively more brownish in essence,” Marmor told LiveScience. “It was getting harder to see, it was getting blurrier, but he was probably more bothered by the progressive loss of color vision than the blur alone.”

By altering a photograph of the Japanese bridge in Monet’s garden to how it might appear to him, Marmor shows that at first, Monet saw and painted his world with a yellowish cast, though individual colors were still distinguishable.

Gradually, Monet may have seen the world in more and more of a monotone—Marmor’s work, published in the Archives of Ophthalmology, shows that two later paintings of the bridge with strong overriding red-orange and green-blue tones may have appeared almost the same to him.

“Those two Japanese bridge paintings from close to 1922, which show his use of very, very strong colors, which were somewhat unusual for his style, show how strikingly his blur really even obscured those differences,” Marmor said.

“He definitely produced some pictures where the colors were quite strange,” art historian Richard Kendall confirmed.

Monet may have used strong colors in these paintings because he was only using them from memory, picking colors by the name on the paint tubes, or because he was overcompensating for his yellow vision by adding more blue, Marmor said.

Fortunately for Monet, cataract surgery was well-established, and in 1923 he finally submitted to the procedure. Afterward, he destroyed many of the paintings he had created during the time when his vision was at its worst, though he had been known to do this before his eyesight began failing. The works that remain from that period were saved by friends and family.

Unlike Monet, it is unclear exactly how today's doctors would diagnose Degas' vision problems. He began noticing trouble with his vision in the late 1880s, and it declined steadily over the next 40 years.

Marmor concluded that Degas “probably had some type of maculopathy, which means a retinal disease that affects the central vision area,” he said. “We know that his vision failed gradually, and fundamentally, things just got blurrier and blurrier.”

But unlike Monet, there was no treatment for Degas’ eye disease—as his vision steadily blurred, the outlines and shading of his work became coarser and more irregular and fine details were lost.

But to him, the blur smoothed out this coarseness, so the form of the subject, which was his focus, looked similar to his earlier works, according to Marmor’s computer manipulations. So it is possible that he was unaware of how the later paintings appeared to others.

But friends, family and art critics noticed the dramatic change from his earlier works, and pointed it out to Degas.

“I think some of them were urging him to maybe quit,” Marmor said. “One of the interesting issues was: why did he continue to paint?”

Kendall points out, however, that Degas produced some of his finest masterpieces during this later period, and some of his paintings were remarkably clear, so it is possible his eyesight was not always a serious obstacle.

Marmor says his analysis could affect the interpretation of Degas' and Monet’s paintings, just as other aspects of an artist’s life might affect how their work is viewed.

“I think it does not say that the paintings are good or bad or answer to the question as to how much they were trying to change their style,” Marmor said. “But I think it points out very dramatically some physical limitations that they had, which both limited their ability to paint, to put paint on canvas directly, but also to interpret what they were putting on a canvas—they couldn’t really judge what they were seeing.”

But Kendall, and Marmor himself, caution against over-interpreting the artists’ eyesight problems, saying it is impossible to tell what the artist intended his work to look like to those who viewed the paintings or how much of the changes in Monet's and Degas' art were conscious changes in style.