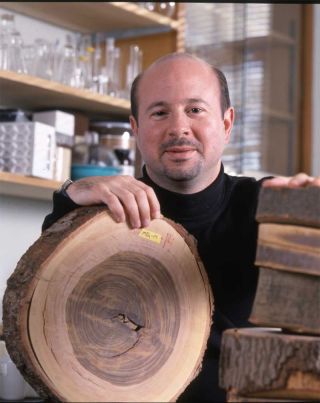 Very few faces are as closely linked with the American debate over climate change as Michael Mann's. The Pennsylvania State University climate scientist is one of the authors of the famous "hockey stick" graph, a chart showing reconstructed temperature records stretching back 1,000 years. The graph swings upward sharply post-industrial revolution, looking a bit like the blade on a hockey stick.

The publication of this graph in the Intergovernmental Panel on Climate Change (IPCC) Third Assessment Report in 2001 thrust Mann into the limelight. It wasn't a gentle glare: Mann would find himself excoriated, investigated and ridiculed by skeptics of human-caused climate change. He'd later find himself at the center of another controversy, the 2009 "Climategate" hacking of climate scientist's emails to one another from a University of East Anglia server.

Now, Mann is telling his side of the story in a new book, "The Hockey Stick and the Climate Wars: Dispatches from the Front Lines" (Columbia University Press, 2012). LiveScience caught up with Mann about the book, the hockey stick and what it's like to be, in his words, an "accidental and reluctant" crusader for climate science.

LiveScience: What spurred you to write this book about your experiences in the trenches of the climate wars?

Mann: I had been encouraged by friends and colleagues to write about my story for some time, because my experiences do have some salience in what I refer to as the "Climate Wars," this concerted attack over the past two decades against the science of climate change, mostly coordinated by powerful vested interests who don't want to see us end our reliance on fossil fuels for energy. [Top 10 Ways to Destroy Earth]

Things sort of came to a head about three years ago when I decided that so much had happened to me already that it was time to tell my story. Hopefully I can use that as a vehicle to examine some of the issues involved: the reality of human-caused climate change, the evidence for it, the origins of the attacks against the science and what drives those attacks, and finally a look forward. How can we get past this bad-faith debate about the reality of the problem and to the worthy debate about what to do about the problem?

LiveScience: Your descriptions of the events since the publication of the "hockey stick" are very detailed, often with quotes from news articles from the time. Had you been saving these clips as the events unfolded?

Mann: I have. I have huge folders on my computer where every time there's a development. I've been saving the articles, I've been taking notes, because I knew that at one point I would want to tell my story.

LiveScience: Some of the events you describe are very intense, including what seemed to be an anthrax letter mailed to your office, which luckily turned out to be a false alarm. Did reliving these experiences bring back any emotions?

Mann: In many ways, writing the book was therapeutic. It was cathartic, because some of the most relevant, most important events unfolded as I was already writing the book, including the hack of the Climatic Research Unit at the University of East Anglia. Part of what helped me get through those experiences was being able to write about them and knowing that I would ultimately get to tell the true story behind the attacks against me.

LiveScience: In many cases, you describe these attacks in a very matter-of-fact way. Was that a deliberate choice to avoid going into depth about your emotional response?

Mann: I wanted, to some extent, to let the facts speak for themselves. Inevitably, some of our detractors are engaged in a 'blame the victim' campaign against me, so I thought it was important for me not to be overly emotional about how I described the things that have unfolded, but lay them out in a way that speaks for themselves so that readers can draw their own conclusions.

I do try to give the reader a sense of what it feels like to be at the center of this coordinated attack against my character and integrity, so I hope readers do come away with that sense. But I didn't want to prescribe how readers should feel about these events.

LiveScience: Looking back on everything that's happened, was it worth it?

Mann: That's a great question. The bottom line is that if I could do it all over again, if I could go back to that critical juncture where I decided to transition from the study of theoretical physics to the study of Earth's climate system, would I undo that decision? And the answer is no, I wouldn't.

I was sort of an accidental and reluctant public figure in this debate, but through the experiences I've had along the way, I've found myself in a position where I can help inform the larger public discourse over human-caused climate change and what to do about it. I guess I feel fortunate to be in a position to inform that critical discussion. Being in the position to help ensure that we make the right choices so that our children and grandchildren inherit a healthy Earth, I couldn't imagine a more important issue to devote my life to.

LiveScience: Has the "hockey stick" experience changed the way you view the role of scientists in society?

Mann: Yes, absolutely. I once held the view that my role as a scientist was done once I'd published a paper or left the lab at the end of the day. I've subsequently come to the realization that that's just not enough. There are too many out there who are looking to cloud the public discourse, to disingenuously mischaracterize the findings of scientists, to discredit science and scientists. If we allow those people, those institutions, to successfully cloud the public's understanding of the problem, then we'll have done a great injustice to society. We do have a role in advocating for an informed discussion.

LiveScience: In your book, you talk about going to the Florida Keys during a cold snap right after the East Anglia hacking and getting a lot of "where's this global warming I hear so much about?" skepticism. You describe this as getting kicked while you were down, but you still engaged in conversations to explain the science to people. With the public debate over climate change so politicized, did you see those one-on-one conversations bearing fruit?

Mann: Certainly. I think as scientists we have to recognize a distinction. There are some out there who are sort of impermeable; they are immune to any efforts to try to deliver information to them. Their position on climate change isn't based on their thoughts on the science. It comes from an ideological or political point of view, so just trying to throw facts at them isn't necessarily going to change their minds.

But it's dangerous for us to assume that when we meet someone on the street who expresses contrarianism or skepticism or outright denial that they are beyond reason. I think we're sometimes too quick to dismiss those people. I've often been surprised that when you have a one-on-one conversation you can get to the core of their skepticism — it may be because they have a libertarian philosophy — and you can at least clarify where the real debate ought to be. It's not about the reality of the problem, but about what we should do about the problem.

LiveScience: Do you have a nightmare scenario that you worry about if we let climate change go unchecked?

Mann: I do, and frankly it's that nightmare scenario encapsulated in my colleague James Hansen's characterization that if we proceed with business as usual we'll be leaving our children and grandchildren 'a different planet'. When you read some of the reports of national security experts about matters of food security, energy security, water security and the conflicts those issues could engender, it's not all that different, in the worst-case scenarios, of the visions presented by Hollywood of a dystopian future Earth. It underscores the urgency. Not the futility; there is time to prevent our climate from crossing what could be described as a dangerous threshold of climate change, but there isn't a whole lot of time. [Earth in the Balance: 7 Crucial Tipping Points] LiveScience: You end your book on an optimistic note. Do you still believe there is hope for climate change solutions?

Mann: I do. I've seen some real signs of optimism in the developments of recent months.

I'm encouraged by some of the public polling I've seen recently that suggests that the public is increasingly accepting the reality of human-caused climate change. I have no illusions — that [increase in public acceptance] may be based at least partly on the unusually warm winter we've had in the U.S. and Canada. But ultimately I think what's happening here is that the public is starting to see in their collective experiences the impacts of climate change, whether they're gardeners or hunters or fishermen.

This last winter we saw six times as many record warm days in the U.S.  as we would expect in the absence of a changing climate. People feel that. They're seeing it out their windows and in their gardens. I think that denial of the problem is ultimately doomed to failure, because who are people going to believe? That talking head on the radio trying to convince them that nothing is happening, or their own eyes?

I am optimistic, and I hope my book conveys both the recognition of the challenge, but also the very real prospects for tackling the problem.