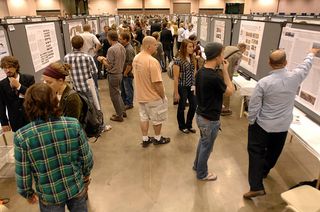 MINNEAPOLIS — The annual meeting of the Geological Society of America isn't the type of affair one might associate with outrage among the citizenry — or anyone, really.

At the recent four-day meeting, scientists of all ages, nationalities and sartorial sensibilities sat in darkened conference rooms, laughed at bewildering jokes, presented research and bonded in the permanent, interminable line at the single place in the airport-sized convention center that sold coffee.

Save for some particularly nerdy jokes shouted at a local pub, the people of Minneapolis might never have noticed the 6,000 or so scientists suddenly in their midst.

Yet on the final day of the conference, a knot of protestors gathered outside the convention center, chanting and pumping signs in the air. Only nine protestors, but still — what had sparked their ire? [10 Historically Significant Political Protests]

One man. In fact, one Michael E. Mann, the protestors said, as a cool afternoon drizzle wilted signs that read, "Erik the Red and thousands of Vikings can't be wrong," and "What happened to the medieval warming period?"

The signs were taped to hockey sticks — mostly child-sized hockey sticks — a symbol of grand significance among those who dispute that anthropogenic climate change is real, and one that, given the locale, is likely plentiful.

The signs referenced a time about 800 to 1,000 years ago when, scientific research indicates, a combination of natural forces appear to have brought on a period of planetary warmth comparable to the toasty mid-20th century, but cooler than global temperatures today. Evidence of the warm period has become a rallying point for those who don't think human activity is affecting the global climate.

"We heard he was coming, and we are interested in scientific integrity," said Kim Crockett, an elegantly dressed woman with a silvery bob hairstyle who was in charge of the protest. "We feel he has not practiced that with his hockey stick graph."

What is now known as the hockey stick graph was published in a 1999 paper in the journal Geophysical Research Letters, and represents temperature in the Northern Hemisphere between the years 1000 and 2000 A.D. The line is vaguely flat until the early 20th century, when it begins a precipitous climb, similar to the shape of a hockey stick.

Mann, a climate researcher and director of Pennsylvania State University's Earth System Science Center, was one of the lead authors of that paper. The overall findings — that the rapidly increasing temperatures glimpsed in the latter half of the 20th century are anomalous and historically significant — have been backed up again and again by subsequent research.

Mann was also one of the scientists involved in the now infamous "Climategate" incident, which involved stolen emails that allegedly, according to some climate change skeptics, revealed a degree of data fiddling. Several independent investigations found no scientific malfeasance was afoot.

While the protestors walked in a tight circle on a traffic median, Mann was inside the convention center delivering a talk entitled, "Climate Scientists in the Public Arena: Who's Got Our Backs?"

Several hours earlier, long before the protestors appeared, Mann sat down with a cup of coffee in the sundrenched lobby of a nearby hotel to offer a brief preview of his talk. Mann said he'd been giving some version of it for the last couple of years.

"I've been asked to, and frankly, I think it's incumbent upon me to speak out — first of all about the strength of the underlying science, and the efforts to attack the messenger because the message is inconvenient," Mann said. [Read: Climate Change Debunked? Not So Fast]

When asked why he thinks the attacks have persisted, and if there was a precedent for the present embattled position of climate scientists, Mann looked to the not-so-distant past.

"I think we're seeing in the area of climate change what we saw with tobacco, with pharmaceuticals, any area of science where there are powerful, vested interests who may feel threatened by the findings of science," Mann said. "And in the past we have seen those special interests do all they can to manufacture false controversy and to try to distort the public discourse — to confuse the public about the reality of these problems."

Mann said the reality of the problem is clear.

In fact, just recently a physicist and skeptic of global warming, Richard Muller, reportedly now agrees the phenomenon is real. His conclusion comes after two years of study to figure out if climate scientists were wrong, according to an Associated Press article.

"To debate whether or not humans are warming the planet is, frankly, silly," he said. "No serious scientist will try to argue that with a straight face in front of fellow scientists. To argue how much future warming we might expect, depending on future fossil fuel burning, there are some uncertainties there," Mann said.

Some of the biggest uncertainties that climate scientists have uncovered in recent years, Mann said, are in the polar regions, where the speed and magnitude of the changes have been unprecedented.

Arctic sea ice has disappeared faster than many models predicted; the ice sheets, glaciers and ice shelves in Antarctica and Greenland appear to be at the mercy of forces scientists don't entirely understand.

"There's reason to believe there are processes that are not represented in the models that have caused us to be overly conservative in the projections we've made," Mann said.

In the end, he said, how global climate change will manifest itself isn't well defined. There's a wide spread of possible outcomes, including more extreme weather in some areas.

Mann said that means it's important for humans to take decisive action to control the forces that drive climate change, as a kind of insurance policy for the planet against future catastrophe.

"The worst-case scenarios may be unlikely, but they're not negligibly unlikely, and we have to take measures to hedge against the possibility that the changes will be at the upper end of the distribution," Mann said. "So we could be having that worthy discussion about real uncertainty, and how it translates into risk assessment and vulnerability, but instead we're still stuck — at least in the public discourse — in this silly debate about the reality of the problem."

Signs of the time

That afternoon, back at the convention center, as Mann delivered his talk, scientists milled around in the main entryway, while the protestors marched in a circle.

One young scientist in a T-shirt stopped short, looking confused, and asked, in heavily accented English, "What is this about? Are they against us?"

Mostly everyone smiled puzzled smiles, or shook their heads, and some stopped to talk to the marchers, who happily obliged.

"The main objection is that Michael Mann created the hockey stick chart, which is kind of the basis for the global warming theory," said a mustachioed and bearded protestor."We don't believe in the theory of global warming, in general — anthropogenic global warming," he said.

"Even if you grant the theory of anthropogenic global warming, I reject the so-called solutions that people are proposing, because I think that they are immoral," she said. "If you took the money that people are talking about, and applied it to other significant human suffering throughout the world, it would be much, much better spent — things like mosquito nets to stop malaria."

She also pointed to programs in Minnesota designed to make roads more user-friendly for pedestrians, cyclists, the elderly, and public transportation (called Complete Streets), and legislation that requires 25 percent of the state's energy come from renewable sources by the year 2025 (Renewable Portfolio Standards), both of which were signed into law by former governor Tim Pawlenty. "They're a very bad idea," she said.

As for Mann — they'd come out just for him?

"It's a great opportunity to just welcome him to Minnesota, and say, 'We're paying attention,'" she said.

Added the bearded protestor, "We're not all drinking the Kool-Aid."