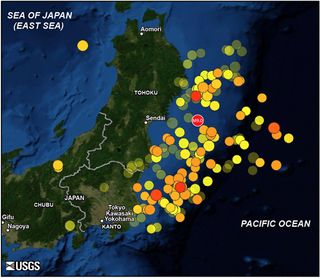 One year ago on March 11, the intense shaking and massive tsunami set off by a 9.0 magnitude earthquake off the coast of Japan wrought noticeable effects on our planet.

Not only did the twin events cause widespread damage along Japan's coast — the quake was the largest in the country's history — but they also triggered effects across the globe, from the surface to high up in the atmosphere. They even slightly altered the Earth's gravity.

Here, OurAmazingPlanet reviews the strangest effects the 2011 Japan earthquake and tsunami had on our planet.

7 – Cracks in the seafloor

The earthquake ruptured below the seafloor off the coast of the Tohoku region, ripping open cracks along the ocean bottom. Submersibles spied these cracks, which measured around 3 to 6 feet (around 1 to 3meters) across, in the months after the earthquake.

The massive 9.0 temblor shook large sections of Japan and is still setting off aftershocks in the area. But the shaking wasn't limited to the immediate region, some scientists think. There is evidence that the quake set off microquakes and tremors around the globe, mostly in places already known for their seismic activity such as Taiwan, Alaska and central California. These events likely didn't exceed a magnitude of 3.0.

However, some of the quakes occurred in low-activity areas, such as central Nebraska, central Arkansas and near Beijing. Tremors were even detected in Cuba. Scientists hope that linking these seismic events can help them better understand the inner workings of earthquakes. [Pictures: Japan Earthquake & Tsunami]

Thousands of miles away from Japan, the seismic waves of the Tohoku earthquake appeared to temporarily speed up the flow of the Whillans glacier. Glaciers are essentially rivers of ice that slowly flow, in the case of Antarctica, from the interior of the continent out to sea. The increased pace of the ice stream was detected by GPS stations located on the ice.

The earthquake and its resulting tsunami were so powerful and far-reaching that they also broke off huge icebergs from Antarctica's Sulzberger Ice Shelf. (An ice shelf is the part of a glacier that floats atop the sea.) Satellite images detected the tsunami waves breaking off chunks of ice some 18 hours after the earthquake.

The massive earthquake not only shook the earth, but also rattled the atmosphere.

Research had indicated that the surface motions and tsunamis that earthquakes generate can also trigger waves in the atmosphere, and the Japan earthquake generated the largest such disturbances seen yet, creating ripples in electrically charged particles reaching nearly 220 miles (350 kilometers) above the Earth.

The earthquake was so powerful that it altered the pull of gravity under the area affected by the quake, as detected by the Gravity Recovery and Climate Experiment (GRACE) satellites. The quake slightly thinned the crust, causes a slight reduction in the local gravity field.

An analysis conducted just days after the earthquake struck found that the temblor accelerated Earth's spin, shortening the length of the 24-hour day by 1.8 microseconds. A microsecond is a millionth of a second.

The planet's rotation sped up because the earthquake shifted the distribution of Earth's mass, said geophysicist Richard Gross at NASA's Jet Propulsion Laboratory in Pasadena, Calif., who made the calculation.