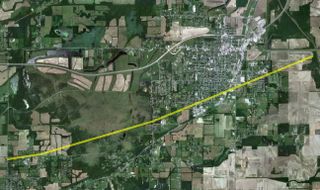 The path of the tornado that struck Harrisburg, Ill.
(Image: © NWS)

The deadly storms that struck the Midwest and South last week were so strong that they created seismic waves.

One of the twisters that struck southeastern Missouri and southern Illinois on Feb. 29 passed through a seismic detection array that includes more than 100 state-of-the-art digital seismographs across the U.S. heartland. While seismographs have been known to detect seismic activity related to tornadoes, it is highly unusual to have the instruments recording information so close to a tornado, the researchers said.

"In examining the seismograms, we recorded unusual seismic signals on three of our stations in southern Illinois," said Michael Hamburger, a geologist at Indiana University and one of the researchers conducting the experiment. "The seismograms show a strong, low-frequency pulse beginning around 4:45 a.m. [local time] on Feb. 29. Our preliminary interpretation, based on other seismic records of tornadoes, suggests that we were recording not the tornado itself, but a large atmospheric pressure transient related to the large thunderstorms that spawned the tornadoes."

The seismographs that detected the pulse are near Harrisburg, Ill., a town of 9,000 where a pre-dawn EF-4 strength twister caused extensive damage, killed six people and injured about 100 more.

The researchers initially thought that some of the instruments might be damaged by the storm, but after the twisters passed they were still alive and streaming data. A closer look at the data from these instruments showed the strange "tornado seismograms" that were recorded on seismographs near Harrisburg.

A seismic pressure gradient associated with the tornado produced a slow, minute tilting of the seismograph that lasted for several minutes, Hamburger said. This sort of pressure-related signal may help scientists better understand atmospheric activity that takes place right before tornadoes touch down, he said. The research team is now looking to compare recordings with other tornado-related signals and to dig deeper into the analysis.

The seismic experiment, dubbed "OIINK" for its geographic coverage in parts of the Ozarks, Illinois, Indiana and Kentucky, includes the positioning of 120 seismometers to study earthquakes and geological structure in a key area of North America. They are recording thousands of earthquakes from the study area and around the world, as well as nearby mining and quarry explosions.