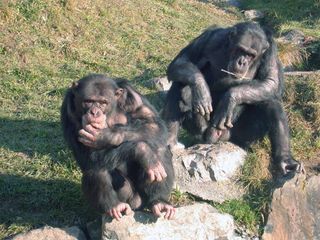 Chimpanzees have police, too. Now, researchers are discovering what makes these simian enforcers of the peace step into conflicts, findings that could help shed light on the roots of policing in humans.

Animals handle conflicts within groups in a variety of ways, such as policing, where impartial bystanders intercede when disputes crop up. Policing, which has been seen in chimps, gorillas, orangutans and other primates, differs from other forms of intervention in that such arbiters are neither biased nor aggressive — they are neither supporting allies nor punishing wrongdoers.

Policing is risky, however, since it involves approaching two or more combative squabblers, which may lead to would-be arbiters becoming the targets of aggression themselves. To find out why primate policing evolved despite such risk, scientists took a closer look at pol.

The researchers analyzed one group of chimpanzees in a zoo in Gossau, Switzerland, for nearly 600 hours over two years. This group experienced a great deal of social tumult — zookeepers there introduced three new adult female chimps, upsetting the former order, and a power struggle also led to a new alpha male. The investigators also looked at records of chimp policing behavior at three other zoos.

The scientists monitored ape social interactions, such as aggressive conflicts, friendly grooming and policing behavior. Policing could involve threatening both quarrelers in a conflict, or running between the antagonists to break up the squabble.

The researchers explored a couple of potential explanations for policing. For instance, policing might help high-ranking members of a group control rivals to keep themselves dominant, or to help keep potential mates from leaving the group. However, both explanations would require high-ranking males to be the arbiters — female chimps usually do not fight over rank, and female chimps are the most likely members to leave groups, not males. In contrast, the researchers found that police chimps were of both sexes. [8 Ways Chimps Act Like Us]

The researchers suggest policing helps improve the stability of groups, thus providing the arbiters with a healthy community to live in. Supporting this notion is the fact that arbiters were more willing to intervene impartially if several quarrelers were involved in a dispute, probably because such conflicts are more likely to jeopardize group peace.

"The interest in community concern that is highly developed in us humans and forms the basis for our moral behavior is deeply rooted — it can also be observed in our closest relatives," said researcher Claudia Rudolf von Rohr at the University of Zurich.

The scientists detailed their findings online today (March 7) in the journal PLoS ONE.