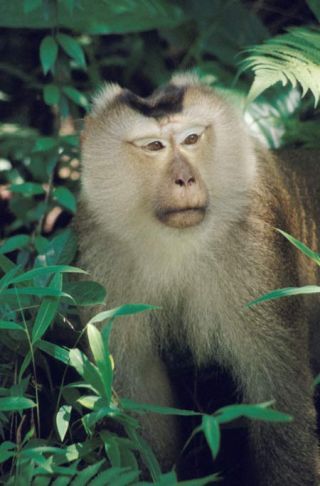 Not having guns or nightsticks, they leverage their group seniority, craft intimidating reputations and count on good voter turnout.

Take the primate police out of a group, as researchers did, and the rest get more violent and aggressive. Interaction between cliques drops significantly.

"It's not just that violence goes up, but a whole range of behavior involving a whole range of individuals suddenly disappears," said David Krakauer of the Santa Fe Institute. "It's like saying you take police out of human society, and all of a sudden people stop going to the opera, or something more important."

The study, detailed in today's issue of the journal Nature, also uncovered a complex monkey "voting" system for appointing the peacekeepers.

Pigtailed macaque monkeys, Macaca nemestrina, don't just pull into town like Wyatt Earp or Dirty Harry and take over. They have to be "appointed" to the position.

Instead of a paper ballot, inferior monkeys bare their teeth to a more dominant member of the group.

"It's like they're saying, ‘You don't have to beat me up to establish your dominance, I'm simply telling you that you are,'" Krakauer told LiveScience.

When an individual receives these voting signals from most of the group, it shows he is well respected—or feared—and he becomes the new sheriff in town.

In general, the larger and more senior monkeys are voted into the policing role.

But having a gang to back you up counts for something, too. A single Schwarzenegger-like monkey may not receive as many "votes" from the group as a smaller individual with several brothers.

Once elected, police monkeys earn certain rights and responsibilities, one of which is to peacefully settle conflicts. They usually do this by stepping between combatants or chasing bad monkeys away. Very rarely do they need to dish out a whooping, but their actions are always respected by the group.

When Krakauer and his colleagues removed the police force—which in this case consisted of three males, but can also include females—they saw a drastic change in a once peaceful, interactive society.

The creatures split into cliques, mostly based on tight family relationships or friendships, and then interacted about as well as high school jocks and band geeks.

"The policers are indirectly providing the security needed for complex forms of social interaction to take place," Krakauer said. "The monkeys are afraid of approaching each other if the policers are not there to resolve a potential conflict."