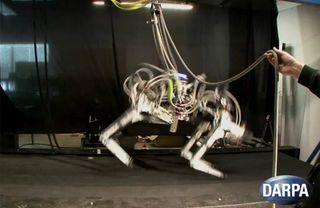 A robotic cheetah funded by the U.S. military sprinted at speeds of up to 18 mph to set a new land speed record.
(Image: © DARPA)

A cheetah robot funded by the U.S. military has broken the land speed record while running on a lab treadmill. Its robotic display of athleticism gives hope for new battlefield robots that could prove nimbler than existing robots on wheels or tanklike treads.

The cheetah robot's record-breaking sprint appeared in a new video posted by the U.S. Defense Advanced Research Projects Agency (DARPA) today (March 5). Its top running speed of 18 mph (29 kph) is faster than the average human jogger, but still lags behind top human speeds of nearly 28 mph (45 kph) — perhaps a relief for anyone fearing a world where robots can outrun their human overlords.

Such a performance also pales next to real-life cheetahs that represent the world's fastest land animal by reaching eye-watering speeds of 70 mph (112 kph). Still, the robot's ability to mimic the cheetah's natural stride by flexing and unflexing its back on each step allowed it to beat the previous record of 13.1 mph, set in 1989.

The test marks an early milestone in the U.S. military's quest to create more mobile robots capable of going where legged human soldiers can go. DARPA has funded the cheetah robot made by Boston Dynamics alongside a Flamingo- or Velociraptor-shaped robot inspired by an MIT design.

Boston Dynamics has also created a four-legged, headless "LS3" robotic mule designed to haul 400 pounds of gear for human soldiers on a 20-mile trek without refueling. That represents a larger version of the company's "BigDog" robot that gained Internet fame in viral videos showing its ability to stay on its legs despite kicks from human tormentors.

The cheetah robot cannot roam free from the lab like the robotic mule just yet — it remains tethered to a hydraulic pump and an overhanging device that keeps it running in the center of the treadmill. But tests of a free-running version are scheduled for later this year. Follow InnovationNewsDaily on Twitter @News_Innovation, or on Facebook.