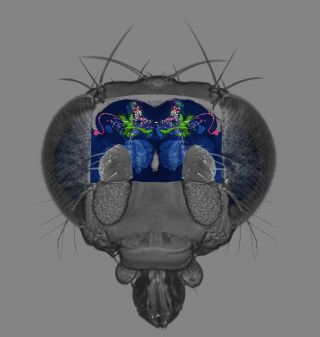 Inside the teensy brains of fruit flies lies the blueprint for how memories form — information that likely carries over to our bulky noggins — and researchers have just identified two genes that are key to forming long-term memories.

"The research could help us tremendously in understanding our own brain and how it forms long-term memories," said lead researcher Ann-Shyn Chiang, a neuroscientist at the National Tsing Hua University in Taiwan.

Fruit flies (Drosophila melanogaster) have long been used as models to understand how memory works in other species, humans included. Most scientists thought that fruit fly memory consolidation — the conversion of short-term memories to long-term memories — happened entirely in a brain region called the mushroom body, which is the adult learning and memory center and is analogous to the human hippocampus.

But, using new genetic tools, Chiang and his colleagues found that two specific neurons located outside of the mushroom body are the primary workhorses in the formation of new long-term memories. Moreover, they've identified two genes that are essential to the formation of proteins that enable memories to be locked in.

In humans, this process is likely a little more complicated, but the basic principles may be similar, Chiang said, adding that the research could someday help yield treatments for memory problems. "If a memory is defective, we may be able to find what proteins are involved and discover possible ways to rescue the memory," Chiang told LiveScience.

To study the long-term memory formation of fruit flies, researchers often use a combination of odors and electric shocks: They expose a fruit fly to an odor followed by an electric shock, and then expose it to another odor with no shock. Researchers will repeat this training several times over spaced intervals and then test the fly's memory by letting it choose between two wings in a T-shaped arena, one holding the shock-associated scent and the other the safe scent. If the fly formed a long-term memory about the odors, even 24 hours after training, it would likely scurry to the safe wing.

In previous studies, researchers found they could stop long-term memory formation in the flies by feeding them a drug that inhibits new protein synthesis, which is thought to help form memories by strengthening the connections between neurons. However, because the drugs inhibit all brain cells from synthesizing proteins, it was impossible to pinpoint which neurons were making the proteins for long-term memories, Chiang said.

To get around this issue, Chiang and his colleagues engineered a temperature-sensitive toxin that disables protein synthesis in targeted neuron cell types. The researchers systematically screened the flies' brains for neurons vital to long-term memory formation by switching the toxin on and off with heat in various brain areas.

"This was a big surprise to us and will probably be for most people in the [neurobiology] field," Chiang said.

Next, the researchers engineered flies with a green fluorescent protein that permanently changes to red when exposed to ultraviolet light: By periodically shining UV light onto the flies' brains, they could change old proteins to red and see where and when the new green proteins form.

More importantly, this genetic tool allowed them to figure out the specific genes responsible for the new proteins, identifying so-called calcium/calmodulin-dependent protein kinase II and period genes in the two DAL neurons. The fluorescent proteins also revealed that memories are initially processed by mushroom body neurons before moving to the DAL brain cells. Chiang suspects other brain cells are also involved in protein synthesis important for memories.

Josh Dubnau, who studies fruit fly memory formation at the Cold Spring Harbor Laboratory in New York and was not involved with the research, was intrigued that the seemingly simple organism uses multiple brain areas to consolidate memories, a process only expected in more complex animals, such as humans.

"The fact that this is happening in the fruit fly brain suggests that it's a very fundamental feature of memory," Dubnau told LiveScience. "It may mean this is the best way to design the [memory] system."

Dubnau stressed that this type of research is vital to understanding the human brain.

"Say you wanted to reverse-engineer one of the world's most advanced computers — if you couldn't do it with a pocket calculator or an iPhone, you have no chance with a more complicated system," said Dubnau, who authored a companion perspective to the new study, published in the Feb. 10 issue of the journal Science. "We first need a model, to know how we go about understanding human memory."