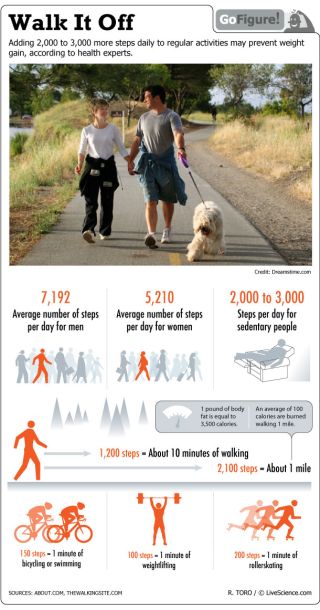 Scientists aren't sure exactly what caused our ancestors to lift their knuckles from the ground and walk with an upright posture, or even how or when this occurred.

Of course, research into our past has offered up various clues; and regardless of the how, when and why, modern humans today reap the rewards of walking on two feet. Think about carrying your Coach bag or even a baby in your arms while on all fours.

Walking is great exercise, too, with our bipedal bouts shown to keep pounds off (at least with brisk walking), boost memory (in older adults) and your mood. It can curb chocolate cravings, decrease diabetes risk, and enhance brain function.

So whom should we thank for our upright stance? Our ancestors.

Scientists think the modern human foot first evolved in our ancestors around 1.8 million years ago, though studies suggest that well before then, our mostly tree-climbing ancestors were walking upright for short stints. (Various studies put this upright posture at some 6 million years ago with one controversial study suggesting it occurred as far back as 21 million years ago.) Without a modern arched foot, these ape-like ancestors may have walked like today's gibbons, whose super-bendy feet give them a floppy strut, according to research on gibbons' gaits. A flexible joint midway along the foot allows gibbons to grasp onto branches while climbing trees, and it turns out makes for funky walking.

Not only do we have an arched foot, but unlike some other animals like cats and dogs that walk on their tip-toes, humans and other great apes walk heel-first. Past research has suggested humans kept this heel-first gait because it's more energy efficient than toe-walking. "Our ancestors were hunter gatherers, so anything that improved walking would make a lot of sense to hang on to," study researcher David Carrier, of the University of Utah, said in 2010 when the study was reported.

Energy savings may have also led to our upright posture; research reported in 2007 in the journal Proceedings of the National Academy of Sciences suggesting humans walking on two legs consume only a quarter of the energy that chimpanzees use while "knuckle-walking" on all fours.

There's also evidence that humans evolved our two-footed posture for its fighting advantage; we punch harder standing than on all fours, and downward punches are much more forceful than upward ones.

Our ancestors, however, didn't have to deal with some risks posed by technology. Recent research suggests you not walk you're texting or talking on your cellphone, as the distraction messes with your working memory, leading to a changed gait. Result: accidents.