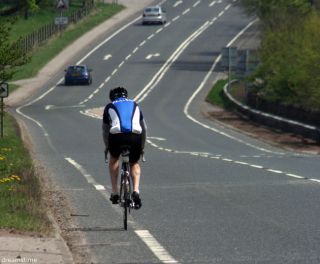 A cyclist on a road.
(Image: © Dreamstime)

Bicycling and brisk walking can help you lose weight, according to a new study by Harvard researchers. Admittedly, this sounds like another study fresh out of the pages of the American Journal of No Duh. But there was reason in the madness of studying the obvious.

The punch line of this study, appearing this week in the Archives of Internal Medicine, is that to maintain a healthy weight, particularly in middle age, you don't have to join a fancy gym, train for a triathlon, or subsist entirely on wheat germ and brown rice. You could just incorporate biking and brisk walking into your day.

This notion goes against some scientific reports stating that you need rigorous exercise to stave off obesity. The Harvard researchers found that, yes, you do have to sweat a little; slow walking doesn't do much. But even biking as little as five minutes a day, as part of a commute, helped women gain less weight than non-bikers. Women who ramped up that biking to four hours a week were far more likely to maintain their weight compared to non-bikers.

The analysis tapped into the Nurses' Health Study II, following more than 18,000 women for 16 years.

Obesity has been on the rise for decades in the United States, but the rates have skyrocketed in recent years. The Centers for Disease Control and Prevention has documented these statistics and displays this alarming trend through the use of an animated U.S. map, showing how obesity was nearly non-existent in 1985 but is now affecting over 30 percent of the population, at http://www.cdc.gov/obesity/data/trends.html. Overall, two-thirds of the U.S. population is overweight or obese.

Biking isn't the complete antidote for obesity; diet helps too. But the Harvard study results should be of no surprise to anyone who has lived in parts of Asia and Europe where biking and walking are common modes of transportation, not a recreation.

The Harvard researchers specifically compared the United States with The Netherlands, where obesity affects only about 8 percent of the population. Over a quarter of the Dutch population bikes regularly, usually to work or to school in dedicated biking lanes. In the United States, only 0.5 percent of commuters use bikes, usually swerving among the landmines of broken glass and opening car doors.

Elsewhere, the common use of bicycles and low rates of obesity throughout Scandinavia and in countries such as Japan and China is no coincidence

Pounds and dollars add up

Although not stated in the published report, the Harvard study results have three other significant implications. Biking and brisk walking are easier on the knees compared with jogging, making this a less painful route to fitness for middle-age and overweight people. Also, as reported last week in the Journal of the American Medical Association, gaining 20 pounds or more after age 50 can triple your risk for diabetes.

There's an upfront cost for a bike, but that quickly could be compensated for from saving on bus fare or gas. Walking is free. Diabetes medicine and treatment will run you hundreds to thousands of dollars a year. Thus, these forms of exercise are ideal for those with strapped incomes.