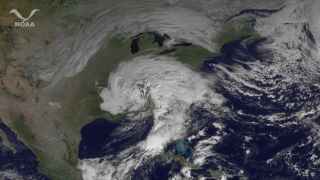 The Twin Cities' run of zero zero-degree days this year could be coming to an end. An intensifying storm over the Tennessee Valley will move to the lower Great Lakes by Thursday evening.
(Image: © NASA/NOAA.)

In case anyone needs more proof of how mild winter has been this year, here's another odd weather nugget: The Twin Cities have not yet seen the temperature drop below zero. Since record keeping began, that has never happened.

Temperatures below 0 degrees Fahrenheit (minus 17.7 degrees Celsius) across southern Minnesota and west central Wisconsin during winter are a fact of life for people there. But with this year's weird winter, folks are wondering where is the cold and snow? There has never been a winter where temperatures at reporting locations across the Twin Cities forecast area failed to drop below zero, according to the National Weather Service (NWS).

That's been bad news for some businesses this year, but a warm treat for everyone else.

"Some people are elated and some people are highly disappointed," said James McQuirter, a meteorologist with the NWS in Chanhassen, Minn., near the Twin Cities.

Mankato, Minn., which is about 80 miles (129 kilometers) southwest of Minneapolis, also has yet to see a temperature below 0 degrees F this winter. The fewest number of below-zero days for a given winter in Mankato was six, which happened in the winter of 1982-1983.

Like much of the country, the Twin Cities region is at the mercy of the Arctic Oscillation, a climate pattern of opposing atmospheric pressures in the middle and high latitudes of the Northern Hemisphere. This year, the Arctic Oscillation has been in a positive phase, which brings warmer-than-average temperatures. The warm weather and a lack of snow cover have kept the cities unusually warm this year, McQuirter told OurAmazingPlanet.

The weird weather could end this weekend, with a good shot at a below-zero day in the region. A cold snap will move across it today (Jan. 12) into Friday, which could cause frigid mornings. However, temperatures will range closer to seasonal norms again over the weekend, with low temperatures in the single digits and highs in the teens and 20s F (around minus 6 C).