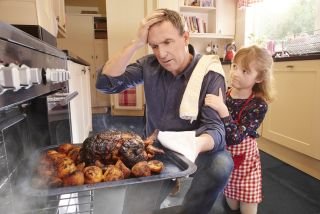 Few people cook a massive feast complete with a roast turkey more than once or twice a year — and that fact means that Thanksgiving's warmth and camaraderie can just as soon turn into a tale of undercooked bird and food-borne illness.

But there are a few tips and tricks that can help ensure that the turkey and stuffing are not only delicious, but safe for consumption, according to Ben Chapman, a professor of food science at North Carolina's State University. Follow these tips and enjoy your Turkey Day meal with peace of mind.

There's no perfectly safe way to defrost a frozen turkey, Chapman told LiveScience. But if frozen is what you've got, the key is to keep the outside of the bird below 41 degrees Fahrenheit (5 degrees Celsius). Most dangerous pathogens (such as Salmonella or Campylobacter) don't grow below that temperature, Chapman said.

To maintain that external temperature while still thawing, you can put the bird in cool water, the fridge or even set it on thaw in the microwave, Chapman said. All of these ideas come with downsides: Microwaves are rarely large enough to hold a big turkey, while leaking juices from a bird thawed in water can contaminate the sink, and the temperature of the water is tough to maintain.

Likewise, thawing a turkey in the fridge takes time. According to the U.S. Department of Agriculture, it takes up to six days to thaw a 20- to 24-pound turkey in the refrigerator. If you do choose that route, Chapman said, keep a pan under the turkey to catch any drippings. The biggest danger of fridge-thawing, he said, is that contaminated turkey juices might end up on ready-to-eat foods like raw apples or lettuce.

It is possible to cook a turkey, unstuffed, from its frozen state, Chapman added, though it usually takes about 50% more time than cooking a thawed bird. Or you could bypass the frozen turkey section altogether.

"The safest method is to buy a fresh turkey," Chapman said.

Defrosting is all the more important if you plan to deep-fry your turkey instead of baking it. Adding a cold bird to hot oil can be an explosive combination — literally — as suddenly-thawed cold water hits the hot oil.

"Water in the turkey, or whatever, boils very fast causing the surface to explode with bubbles, some of which could spray oil on the burner," John Coupland, associate professor of food science at Penn State, wrote in an e-mail to LiveScience in November 2010. Oil plus burner equals instant fire, so take care to treat that turkey right. According to the USDA, only turkeys that weight less than 12 pounds (5.4 kilograms) should be deep-fat fried.

One mistake many people make in the kitchen is to wash their turkey, Chapman said. Running a raw turkey under the faucet does nothing to reduce pathogens, he said, and worse, it can spread them.

"You can spread Campylobacter and Salmonella up to three feet away from your sink," he said. "When you have fast, running water that hits the fairly uneven surface of your turkey, it can aerosolize those pathogens a little bit and spread them around."

Fortunately, there's an easy solution if your turkey is sporting feather fragments or blood, Chapman said. Wipe the turkey with a damp cloth or paper towel, and then stick the cloth right in the washing machine or the paper towel directly in the garbage.

Keep it clean in the kitchen

Making Thanksgiving dinner is a big production, and it's easy to lose track of cutting boards and knives. Such lapses raise the risk of cross-contamination, a big food-safety risk.

"You've got this complex system going on, especially when you've got folks who might not be used to handling raw meat all the time not thinking about that cross-contamination potential," Chapman said.

Cutting boards and utensils that have touched raw meat should be washed with soap and water and then sanitized, Chapman said. A dishwasher will do both, but a bit of bleach will also work if you're washing by hand. Just be sure to clean first and sanitize separately, Chapman said, as sanitizing solutions won't work on dirty utensils.

"You can't just clean stuff," he said. "There are going to be pathogens that stick really well to the cutting board."

Look for the magic number in the oven

Perhaps one of the most intimidating tasks for a Thanksgiving chef is figuring out when the turkey is done. Luckily, you just have to remember one number: 165 degrees Fahrenheit (that's 74 degrees Celsius).

Salmonella and Campylobacter are killed off when the temperature hits 165 F, Chapman said. The trick is to be sure that the whole bird has reached that temperature, not just the outside or the drumstick.

"The leg portion has more surface area, so it's going to cook a lot quicker than internal parts," Chapman said. "Your leg may show 180 degrees while the breast hasn't hit 165."

Use a digital, tip-sensitive thermometer and test multiple portions of the bird, especially in thick muscles away from the turkey body cavity or bone.

Cooking is the key to knocking out nasty bugs like Salmonella, so take care if you're serving any raw side dishes this Thanksgiving. Make sure they haven't come in contact with raw turkey drippings, and keep them away from turkey-contaminated utensils.

Washing raw fruits and vegetables can get rid of grit and pesticides, but it won't do much to reduce pathogens, Chapman said. Soap and other solutions are no better than cold, running water, he added.

All the cooking is done and you can relax, right? Almost — but you've still got to put away the leftovers. The key to safe leftovers is cooling them quickly to that magic 41 F, Chapman said. Because Thanksgiving foods tend to come in bulk, and throwing a bunch of warm foods into a giant storage container isn't the best option.

"If you have this big vat of gravy or whatever, you want to make sure you're breaking it down into smaller sizes so you get the most chilling action in the shortest amount of time," Chapman said.

To cool turkey quickly, cut the meat off the bones and divide it among plastic zip-top bags laid flat on a rack in the fridge, Chapman said. That method allows lots of cool air to circulate, cooling the turkey and leaving it ready for post-Thanksgiving midnight snacks — and days of turkey-sandwich lunches.

Originally published on LiveScience in 2013 and updated in 2019.