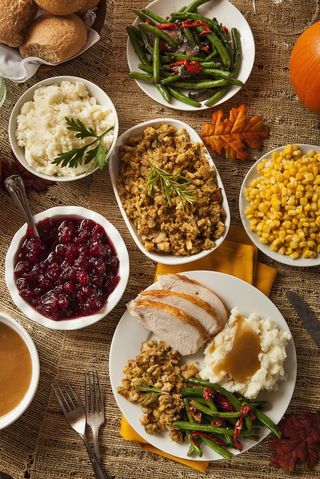 When Thanksgiving was declared a national holiday in 1863, the typical Turkey Day table was stuffed with far more than turkey. Multiple meats were the norm, including unheard-of-today mincemeat pie.

Gradually, as Thanksgiving mythology became codified during the late 1800s, turkey took its place at the head of the table. But some of the side dishes eaten in Thanksgiving's early days rarely make an appearance now.

Here are some menus and recipes from early Thanksgivings, provided to LiveScience by food writer Cynthia Bertelsen, who blogs at Gherkins & Tomatoes. Maybe these old-fashioned meals will inspire something new on your table this year. [Read More: The History of the Thanksgiving Menu]

The French Cook, a 1653 translation of major French cookbook Le Vrai Cuisinier François, including this pumpkin pie recipe, which illustrates a rather more laissez-faire method of cooking instruction than seen today:

Tourte of pumpkin - Boile it with good milk, pass it through a straining pan very thick, and mix it with sugar, butter, a little salt and if you will, a few stamped almonds; let all be very thin. Put it in your sheet of paste; bake it. After it is baked, besprinkle it with sugar and serve.

If crust isn't your thing, the 1796 American Cookery has you covered with several options for "pompkin" pudding:

No.1 One quart stewed and strained pompkin, 3 pints milk, 6 beaten eggs, sugar, mace, nutmeg, and ginger, laid in to paste and baked in dishes three quarters of an hour.

Granite of Cider and Apples

Cutlets of Duck, with Chopped Celery