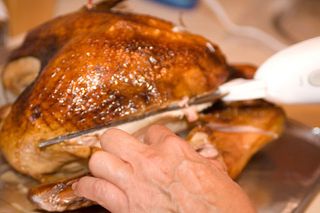 Make sure to check the temperature of your turkey so that it's properly cooked before you cut into it.
(Image: © dreamstime)

Whether you're a seasoned cook or it's your first time stuffing a turkey, you likely want the end result to be tasty and easy on the belly. Yet even experts admit Thanksgiving dinner can be challenging.

"It's a complicated meal," said Ben Chapman, food safety specialist and assistant professor of food science at North Carolina State University. "You're cooking with something you might only cook once or twice a year. And you're cooking for a large group. As a meal, it's one of the ones that's harder to manage."

Chapman has deciphered myth and family-lore from fact to produce some helpful tips so your meal will at least be safe.

“The biggest risk comes from undercooking," Chapman said. "You also have to worry about cross-contamination, which can happen when countertops, sinks or utensils aren’t being cleaned properly between use with raw meats and other foods."

MYTH No. 1: The turkey is cooked when the juices run clear or when the leg pulls away from the bone.

FACT: "Color is not an indicator of safety or doneness," Chapman said.

Turkey juices do change from raw-meat pink to a clear color as the bird cooks, but that doesn't equate with safe eating. "That isn't necessarily the temperature that the pathogens are killed at," Chapman said.

The two most common pathogens associated with turkeys, and the ones we aim to blast before serving, are Campylobacter and Salmonella, according to the U.S. Department of Agriculture (USDA). These pathogens can't grow until the temperature hits 41 degrees Fahrenheit, and they are killed off when the thermometer reaches 165 degrees F.

How to measure a turkey's doneness: Stick a tip-sensitive digital thermometer into perhaps eight to 10 spots on the turkey. If the thermometer reads at least 165 degrees F all around, it can come out. Chapman says to target areas of thick muscle away from the turkey cavity and bone. The bone conducts heat much better than does the meat and so could give you a false reading.

MYTH No. 2: You should cool your turkey to room temperature for a while before putting it in the fridge.

FACT: Decades ago, when people plopped a hot turkey into the refrigerator, the heat would overload the system and lead to spoiled milk. "This might have been true 30 years ago, but refrigerators today are now built to keep the temperature constant, so while it might be a bit of an energy suck, the safest thing to do is get the leftover meat in the fridge within two hours of removing it from the oven," Chapman said.

You might be thinking you've already zapped the harmful bacteria in the oven, so why the need to rush it into the fridge? Turns out, between the oven and fridge there's lots of opportunity for pathogens to take up residence in your turkey meat, Chapman said.

"You might kill the Salmonella and Campylobacter, but as you're cutting it you might infect the meat with other pathogens," Chapman said. For instance, Staphylococcus aureus lives on most of us around our eyes and nose. But it doesn't release its toxins until it has a food source, like turkey meat. Scratching your nose or rubbing an eye while handling the turkey could give the staph a ride onto the food. The cold temperatures in your fridge will slow down growth, keeping the pathogen at safe levels.

In addition, a few pathogens may have survived the oven in tiny hideouts and if given the opportunity will take off in growth.

MYTH No. 3: The best way to thaw a frozen turkey is in the garage.

FACT: "Not a great idea, because you can't really control the external temperature of the turkey," Chapman said, adding the turkey's temperature could climb above 41 degrees F, at which point the Salmonella and Campylobacter can begin to grow.

Thawing the turkey on the counter can be problematic, too, as the outside of the bird will reach a different temperature than the inside.

And while there is no "best" thawing technique, Chapman lists a few descent ways: placing it in the fridge, microwave or under cool water. All methods, however, come with their own risks. For instance, you have to make sure the turkey's center gets thawed when in the refrigerator.

According to the USDA, here are guidelines for thawing a whole turkey in the refrigerator:

MYTH No. 4: You can safely cook a frozen turkey overnight at a low temperature.

FACT: That low temperature could be just what the harmful bugs need to thrive.

"We call that temperature between 41 and 135 degrees the danger zone. That's the temperature the pathogens can grow at," Chapman told LiveScience. "If you try to cook a turkey low and long, you may be putting the turkey and pathogens in that danger zone for too long, and they'll grow."

He added, "About four hours in that danger zone, you can grow Salmonella and Campylobacter to a level that will make people sick." And you can expect "a nasty couple of days."

MYTH No. 5: Once the turkey is safely cooked, your job as safety cook is done.

FACT: Fresh fruits and vegetables have been linked to more outbreaks of foodborne illness than any other type of food.

Once produce has become contaminated, it can be tricky to shake the bad guys, including Salmonella and E. coli, loose. That's partly because bacteria can form tight-knit communities called biofilms that hang on to fruits and veggies.

Rough surfaces like those on cantaloupes and spinach provide lots of nooks and crannies where pathogens can hang out. For cantaloupes, the bacteria can be transferred from the surface to the internal tissues when preparing.

You'd want to scrub such produce more thoroughly in cool water. But too intense of a cleaning could bruise or tear the protective skin covering the food. The result could be spoilage and the associated bacteria, according to the USDA.

The U.S. Food and Drug Administration recommends storing produce that is supposed to be kept cool in the refrigerator at a setting of 40 degrees F or below. And toss out any bruised or slightly rotting fruits and serve your fresher goods.