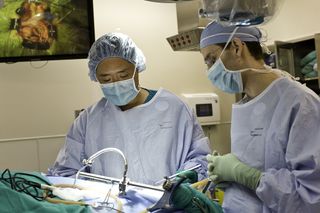 On Thanksgiving, everything from carving injuries to overeating can be grounds for a trip to the ER.
(Image: © Memorial Hermann)

The holidays are a time of joy and giving thanks. But like any occasion that involves families gathering to enjoy good food and each other's company, accidents can happen.

LiveScience asked emergency room doctors about the weirdest, funniest or most unfortunate reasons for a visit to the ER over Thanksgiving and other holidays. From deep-fryer burns to in-law anxiety, here are some of the most notable:

Nothing says Thanksgiving like cooking an obscenely large farm bird. Perhaps it's not surprising, then, that emergency rooms see a lot of fowl-related injuries on Turkey Day.

Deep-frying turkeys poses a major hazard. If the turkey is wet or partially frozen when it hits the oil, the bird can catch fire, or even explode. "We've had fires that singed hair and eyebrows, and splash burns to the face," said Dr. Robert Glatter, an emergency physician at Lenox Hill Hospital in New York. [Avoiding Fried Turkey Disaster (Infographic)]

People also drop their turkeys, causing second-degree burns to the tops of their feet, contusions and the occasional toe fracture, Glatter told LiveScience. Sometimes, cooks slip on their turkeys and hit their heads, he added.

What happens when you mix slightly inebriated people with carving knives? "A lot of finger lacerations and thumb lacerations," Glatter said. His advice? "Don't carve under the influence."

And the knife isn't always the source of injury. Sometimes, while people are carving the turkey, they skewer themselves with pieces of turkey bone, said Dr. Joseph Garber, the director of emergency medicine at  Syosset Hospital in New York.

One of the most common problems around Thanksgiving, as one might guess, involves eating and drinking too much, Glatter said. The combination, he explained, can cause a surge in epinephrine or norepinephrine, which triggers atrial fibrillation (an irregular heartbeat) in a structurally normal heart. Doctors call it "holiday heart." Normally, hydration is all that's needed to treat it. [Thanksgiving: 10 Tips for Sticking to Healthy Portions]

Overeating can also lead to vomiting or intestinal blockage, said Dr. Rick Nelson, an emergency physician at The Ohio State University Wexner Medical Center in Columbus, Ohio. And when people eat too quickly, food can get lodged in their throats — especially turkey, because it's so dry.

Food allergies also rear their ugly heads at the holidays. Patrick said he sees a lot of children in anaphylactic shock around Thanksgiving, because they have eaten foods prepared by others unfamiliar with their dietary restrictions. (Anaphylactic shock is a severe allergic reaction that can be life threatening.)

Before or after the big meal, families and friends often like to let off steam by playing sports, and football injuries are common this time of year. One of the oddest injuries Glatter has seen involved a man who fell while wearing a helmet made out of a raw turkey, the doctor said. But the unconventional headgear was actually helpful — "The turkey prevented him from [suffering] serious [head] injury," Glatter said.

For some, spending the holidays with family is a terrifying prospect. On a November evening before Thanksgiving, a shy young woman arrived at an emergency room in Bedford, Ind., with a chief complaint of anxiety. She told Dr. Sally Sperring, of Southern Indiana Physician group, "'Last January, I married a wonderful man. He is from a very large Italian family. I just don't know how to cope with all those people,'" Sperring recalled. (Full disclosure: Sperring is this writer's aunt.)

Sperring prescribed a mild anti-anxiety medication and suggested the woman tell her mother-in-law that she had a stomachache, as an excuse to escape to the bathroom if things got overwhelming.

This time of year, everyone's looking for the perfect gift for that special someone. A 24-year-old man came into Sperring's ER with "male genito-urinary complaint," she said. During his exam, he blushed and mumbled that he needed some Viagra.

"As he was of an age generally not thought to be in need of such pharmacological support, I gently asked if he had had trouble before," Sperring said. She said the man told her, "No, but my girlfriend is coming for Christmas, and I am scared I won't be able to give her the present I was promising."