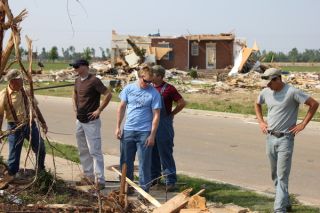 TALLADEGA, Ala. — For the stars of the National Geographic Channel's "Rocket City Rednecks," tomorrow night's episode is personal.

During the April 2011 Super Outbreak, an EF-5 tornado tore through the cast's hometown of Huntsville, Ala. — also known as Rocket City, USA, the birthplace of the American space program. An EF-5 tornado is the worst of the worst, the most devastating on the Enhanced Fujita tornado damage scale, with winds of over to 200 mph (322 kph). The storm's track passed half of a mile from two of the stars' homes.

"It ripped the porch off my house and threw it through the roof," said the show's ringleader, Travis Taylor.

None of the cast members were hurt during the storm, but more than 300 people died during the deadly Dixie Alley outbreak, which lasted from April 25 to 28, adding to one of the deadliest tornado seasons in history.

OurAmazingPlanet caught up with the cast here at the Talladega Superspeedway during the taping of the show's season finale. In between takes, and when the deafening pack of stock cars were at the opposite end of the 2.66-mile (4.28 kilometers) track, the stars talked about their tour through one neighborhood in Huntsville that was reduced to rubble.

"It was sad as hell going through and seeing everything, because you see kids' toys and stuff," co-star Rog Jones told OurAmazingPlanet.

Even with advanced warnings, many people in Dixie Alley did not have a safe place to hunker down during the storm. That's something the Rednecks hope to change with their self-described "hillbilly ingenuity."

In Dixie Alley, the southeastern neighbor to the more famous Tornado Alley, where many of the April twisters struck, tornadoes do not need to be big to be deadly. Unlike the flat, grass-covered plains of Tornado Alley, tornadoes are hard to see in Dixie Alley. Trees and hilly terrain obscure funnel clouds, a problem made even worse by the region's high rate of nighttime tornadoes. The region is also home to many manufactured houses and mobile homes that have weak walls and poor or nonexistent foundations, making them more vulnerable to damage and destruction.

In their latest episode, airing Wednesday night on the National Geographic Channel (Nov. 16 at 9 p.m. EDT — check local listings), they show how anyone can build a tornado shelter — a tornado-proof outhouse in this case — for less than $2,000 and with supplies from a local hardware store.

To simulate the debris from an EF-5 tornado, the crew built an air canon and fired wooden missiles at the cement shelter. Their ammo: 8-foot-long (2.4 meters) wooden 2-by-4 planks, shot at speeds of up to 200 mph (322 kph).

"It hit the side of it, and the 2-by-4 just turned into splinters," said co-star Michael Taylor, Travis's nephew.

For the second crash test, the crew tried something a little bigger — a free-falling car dropped from about 50 feet (15 m) in the air.

"Tornadoes don't just take shrapnel and just launch it into your house," said Pete Erbach, Travis's brother-in-law and an optical scientist. "They pick up stuff — take trees from around your house — and drop it on it, so we've got to make sure the structure can withstand a heavy object hitting it."

The new episode airs during the middle of the so-called second tornado season, the fall peak in severe weather. Just because the region was hit so hard during the spring doesn't mean that it can't get hit again, the cast said. Now is the time to plan for the worst.

"There's no excuse for people not to have a storm shelter," Taylor said.