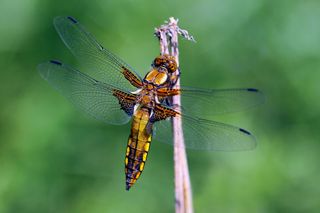 Dragonflies that were exposed to predatory fish were more likely to die when predators shared their habitat, even if they were out of harm's way, according to the researchers.
(Image: © MarkMirror | shutterstock)

Just the mere presence of a predator can stress out dragonfly larvae enough to kill them — even if the dragonflies are out of the predator's reach and completely safe, a new study shows.

Biologists at the University of Toronto placed juvenile dragonfly (Leucorrhinia intacta) larvae and their predatory fish together in aquarium tanks. The two were separated so that although the dragonflies could see and smell their predators, the fish could not actually reach or eat the dragonflies.

"What we found was unexpected — more of the dragonflies died when predators shared their habitat," study researcher Locke Rowe, chairman of the Department of Ecology and Evolutionary Biology at the university, said in a statement.

The dragonfly larvae that were exposed to predatory fish or aquatic insects whose presence may have also caused the larvae stress had survival rates 2.5 to 4.3 times lower than those that had not been exposed to either stressor.

Rowe and colleagues then conducted another experiment to determine whether stressful conditions influence dragonfly metamorphosis. "We allowed the juvenile dragonflies to go through metamorphosis to become adult dragonflies, and found those that had grown up around predators were more likely to fail to complete metamorphosis successfully, more often dying in the process," Rowe said.

The results showed that 11 percent of the larvae that were exposed to fish died before reaching adulthood, compared with only 2 percent of larvae that went through metamorphosis in a predator-free environment.

"As we learn more about how animals respond to stressful conditions — whether it's the presence of predators or stresses from other natural or human-caused disruptions — we increasingly find that stress brings a greater risk of death, presumably from things such as infections that normally wouldn't kill them," Rowe said.

The findings can be used as a model for future studies on the harmful and potentially lethal effects of stress on living organisms, the researchers suggested.