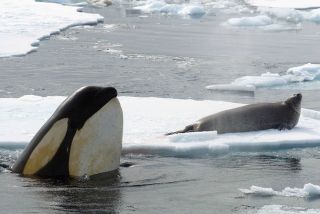 A type B killer whale hunting for seals in the Antarctic pack ice: note the yellow tinge of algal growth that has accumulated on the outer skin.
(Image: © John Durban, NOAA)

In a little over a month, Antarctic killer whales trek from their chilly residence to the warm waters off the coast of South America and back, researchers have found. The whales spend their "tropical vacation" letting their skin slough off, replacing the old with new.

"It was a surprise to us that they undertook this rapid migration to the warm tropical waters," study researcher John Durban, of the National Oceanic and Atmospheric Administration, told LiveScience. "It's like swimming from New York to London and back in a month."

This fast-paced migration seems to be an adaptation to the cold waters of the Antarctic, which have ample food for the whales but can quickly strip the heat from their skin and stop the whales from regenerating and shedding their outer layers. This is the first migration of killer whales that researchers have observed.

"The Antarctic area is a challenging place to live, and they have to move out of the Antarctic to regenerate skin," Durban said. "We suspect it's something that they all have to do. They may even have to do it once a year." [Image Gallery: Life at the South Pole]

The killer whales in the South Pole's icy waters are called "type B" and have gray coloration in addition to black-and-white splotches on their skin. Their white areas are often stained yellow from an algal species that grows on their skin in the Antarctic's frigid waters.

The researchers initially tagged 12 Antarctic killer whales with GPS devices. About half lost their tags in the first three weeks, but the remainder traveled north to the Atlantic Ocean off South America. They moved from waters averaging about minus 28.6 degrees Fahrenheit (minus 1.9 degrees Celsius) to those of about 75.6 degrees F (24.2 degrees C).

Due to the cold conditions of Antarctica, the researchers had a limited field season in which they can tag the whales. The tags were able to follow the whales from Feb. 4 to April 20 before they stopped working. During that period, several groups of whales left for their warm-water destination at different times. Duran said that the whales probably just do this trip when needed, rather than at a distinct time of year.

Each of the tagged whales, if given enough tracking time, eventually made their way north into the Atlantic Ocean. They traveled just far enough to reach the tropical waters off South America, where they slowed their pace slightly, still heading north. Eventually they turned back toward the South Pole. Round trip their vacation covered more than 5,000 ocean-faring miles (9,000 kilometers) in about 40 days.

Researchers had noticed that the killer whales' yellow tint seemed to come and go, often whole family groups of whales would be perfectly white, but others would be stained yellow like a cigarette smoker's teeth. Durban suggests that these whales may travel north to warmer waters in groups to slough off their yellow skins without freezing, returning to the Antarctic waters a pristine white, only to pick up more algae and turn yellow again.

Lots of other marine Antarctic animals make a tropical trek, but their main intentions seem to be either feeding or giving birth to their young. Perhaps these other marine animals use this time to shed their skin, so they don't make a separate trip, Durban said.

The study was published today (Oct. 25) in the journal Biology Letters.