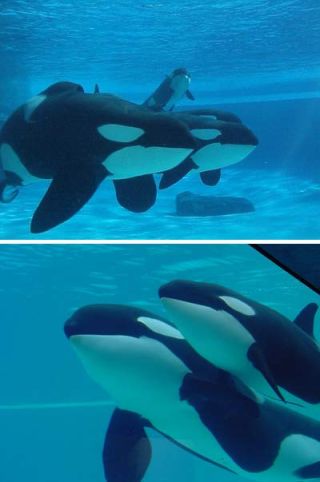 Killer whales engaged in echelon swimming, which sometimes signifies they are making up, a new study found.
(Image: © Michael Noonan)

Whether it's a blowout argument or a dinner-table disagreement, a spat with your lover can be trying. Humans have of course devised ways of making up, including tight hugs and the customary apology flowers.

Killer whales have their own tricks for mending relations, a new study finds. Rather than a bouquet, however, they might opt for an intimate swim.

Studies have shown that chimpanzees kiss and hug after a dispute, and other primates such as bonobos resort to sexual activity to resolve conflicts. Until now, reconciliatory behavior had not been shown in any marine mammal.

For the past five years, Michael Noonan, a psychologist and specialist in animal behavior at Canisius College in Buffalo, New York, has been studying the captive killer whales at the theme park Marineland of Canada in Niagara Falls, Ontario. To learn more about orca social behavior, Noonan videotaped a group of captive killer whales for a total of 2,800 hours.

He noted 21 disagreements, many of which involved complicated interactions between several whales. Most notably, the video revealed eight unambiguous quarrels between one pair—a mother and a father. The disputes entailed aggressive chasing, Noonan said.

Orcas, the largest members of the dolphin family, can reach swimming speeds at sea of 30 miles per hour (50 kilometers per hour) for short stints.

After the mother chased the father for several minutes, each zipped away to separate aquatic quarters to cool off for about 10 minutes. Then, the mates smoothed over their clash with side-by-side swimming, called echelon swimming [image].

"In eight out of eight instances, the animals engaged in a pro-social, affiliative behavior shortly after the period of tension," Noonan told LiveScience. "The pro-social behavior was echelon swimming."

Animal behavior scientists have known that orcas take part in echelon swimming as a form of routine social bonding. "That these two [killer whales] did it so consistently after periods of tension is the new discovery," Noonan said.

The research was presented at the Animal Behavior Society conference earlier this month in Salt Lake City.

"It shows yet another way in which cetaceans have converged with primates, Noonan said. Other similarities: large brains, long lives and social complexity.

But Noonan is still trying to elucidate some secrets held by these black-and-white mammals. For instance, what triggered the domestic squabbles? "We are working on that," he said.