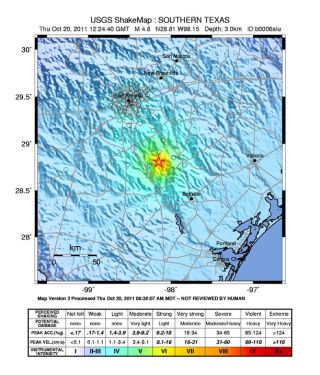 This map shows the intensity of shaking around the epicenter of the earthquake that ruptured near San Antonio, Texas, on Oct. 20.
(Image: © USGS)

Over the past 48 hours, small earthquakes have rocked various parts of the United States, including the largest ever recorded in Texas by the United States Geological Survey. The quakes, in San Francisco, San Antonio and Hawaii, are unrelated, seismologists said.

No casualties have been reported after the quakes.

"We have lots of earthquakes; it's common, really nothing out of the ordinary. None of the quakes are very big," said Paul Caruso, a geophysicist at the National Earthquake Information Center. "They are totally separate faults and in no way related at all."

Caruso said it was the largest earthquake they have ever recorded in Texas, and the quake was "very unusual" because of its size. In 1931, a large-magnitude 5.8 earthquake hit Texas, but that was before the USGS had earthquake-recording devices in the area. A USGS team is investigating the causes of yesterday's quake, which could be related to what's occurring in the ground in that area, Caruso suggests.

A 3.2 magnitude earthquake also shook Hawaii on Wednesday (Oct. 19) at 11:42 p.m. local time (5:42 a.m. EDT Oct. 20).  It has been followed by multiple small quakes over the last 24 hours. Hawaii is a very active fault zone and frequently gets rocked by small earthquakes

California's coast is crisscrossed with earthquake fault lines, and it just so happens that the Bay Area quakes hit just hours after a planned statewide earthquake preparedness drill, the largest ever planned, with nearly 10 million participants. The quakes happened almost exactly 22 years after the Loma Prieta earthquake that struck during the 1989 World Series, killing 63 people and causing $10 billion in damage.

"The Earth is a very dynamic place, it's continuously changing as the continental plates move around and every day is unique," Caruso said. "Some days we have a lot of earthquakes and other days it's really quiet."