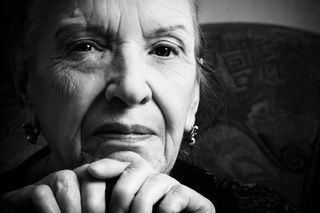 Studying the genetics of centenarians could reveal a recipe for a long life, with scientists finding coveted genes are major players.
(Image: © Dreamstime)

The 115-year-old Hendrikje van Andel-Schipper, who held the title of world's oldest human before she died in 2004, attributed her longevity to eating herring every day. But doctors had a hunch it was a little more than that. After all, everyone and their uncle eats herring in van Andel-Schipper's native country of the Netherlands.

Turns out their hunch was right. It was the herring and a group of coveted genes known to help prevent circulatory disease and Alzheimer's and Parkinson's disease. The genes likely led to van Andel-Schipper's remarkable mental clarity at such an advanced age as well as her ability to lick breast cancer . . . at age 100.

Dutch researcher Henne Holstege of the VU University Medical Center in Amsterdam presented the initial findings from an analysis of van Andel-Schipper’s genes on Oct. 14 at the annual meeting of the International Congress of Human Genetics in Montreal.

Holstege said she hopes van Andel-Schipper's unique genetic blueprint, called a genome, can serve as a reference for future studies of longevity genes. She compared van Andel-Schipper's genome to a checklist of all that's needed to combat the ravages of aging. No other centenarian has been studied as thoroughly. [7 Ways the Mind and Body Change With Age]

Van Andel-Schipper was robust and didn't enter a nursing home until age 105. Researchers grew intrigued by her mental acuity during her later years. Her performance in mental tests at age 113 was above average for a healthy adult between the ages of 60 and 75. Ultimately van Andel-Schipper died of stomach cancer, which is ironic because this type of cancer is rare today but was common in 1890, the year she was born.

Fortunately, van Andel-Schipper decided to donate her body to medical science when she was just a sweet, young thing at age 82, allowing researchers to look more deeply for the underlying causes of her remarkable longevity.

Upon van Andel-Schipper's death, an autopsy of her brain showed no signs of even minor dementia, previously thought to be inevitable for the elderly. Doctors also found no sign of plaque in her arteries. While it is true that van Andel-Schipper's favorite fish, herring, contains heart-healthy omega-3 fatty acids, doctors had never seen such a pristine vascular system in the elderly. [10 New Ways to Eat Well]

Holstege and her Dutch and American colleagues are only in the initial stages of van Andel-Schipper's genome analysis, and no results have been published. Doctors hope that a better understanding of longevity genes can lead to medicines that can suppress the genes that cause disease and activate the genes that promote long life.

The late van Andel-Schipper is unique in that she was among the fewer than 30 people in modern times known to live longer than 115 years; and she is also one of only a few hundred people (so far) to have their complete genome analyzed.

Maybe being the world's oldest person isn't the best goal in life. The title usually is short-lived, with some sinister senior in a rocking chair out to take your title away. But at least you know to get there you don't have to eat herring every day. All you need is that magic combination of genes, distributed to roughly 1 in a billion people.