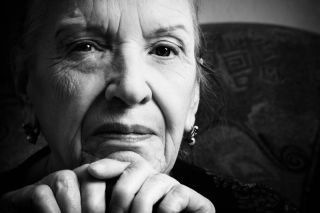 They may be wise, but people who live to very old ages are just as likely as the rest of us to smoke and be obese.
(Image: © Dreamstime.)

Centenarians may have a great deal of wisdom to share, but this apparently does not include advice on how to live to age 100.

Researchers at the Albert Einstein College of Medicine of Yeshiva University have found that many very old people — age 95 and older — could be poster children for bad health behavior with their smoking, drinking, poor diet, obesity and lack of exercise.

The very old are, in fact, no more virtuous than the general population when it comes to shunning bad health habits, leaving researchers to conclude that their genes are mostly responsible for their remarkable longevity.

But before you fall off the wagon and start tossing down doughnuts for breakfast just because your Aunt Edna just turned 102, remember that genetics is a game of chance. What didn't kill Aunt Edna still could kill you prematurely, the researchers cautioned.

The study, appearing Aug. 3 in the online edition of the Journal of the American Geriatrics Society, followed the lives of 477 Ashkenazi Jews between the ages of 95 and 112. They were enrolled in Einstein College's Longevity Genes Project, an ongoing study that seeks to understand why centenarians live as long as they do. About 1 in 4,400 Americans lives to age 100, according to 2010 census data.

A research team led by Nir Barzilai compared these old folks with a group of people representing the general public, captured in a snapshot of health habits collected in the 1970s. The people in this control group were born around the same time as the 95-and-above study group, but they have since died.

The living, old people in the study were remarkably ordinary in their lifestyles, Barzilai said. By and large, they weren't vegetarians, vitamin-pill-poppers or health freaks. Their profiles nearly matched that of the control group in terms of the percentage who were overweight, exercised (or didn't exercise), or smoked. One woman, at age 107, smoked for over 90 years.

Whatever killed the control group — cardiovascular disease, cancer and other diseases clearly associated with lifestyle choices — somehow didn't kill them. "Their genes protected them," Barzilai said. [10 Easy Paths to Self Destruction]

Put down that doughnut

Barzilai said that it would be wrong to forego health advice with the assumption that your genes will determine how long you will live. For the general population, there is a preponderance of evidence that diet and exercise can postpone or ward off chronic disease and extend life. Many studies on Seventh Day Adventists — with their limited consumption of alcohol, tobacco and meat — attribute upward of 10 extra years of life as a result of lifestyle choices.

Note also that those people now age 100 lived in an era when obesity was nearly nonexistent and when daily exercise such as walking down streets or up a few flights of steps was more common. Barzilai said anyone can benefit from exercise at any age, even these indestructible old people pushing and exceeding triple digits.

The big picture for the Longevity Genes Project is to identify those genes keeping folks alive for so long and then use them as targets for drug development. For example, most people treated successfully for heart disease ultimately die well before their 90s from yet another age-related disease. This is because we "never change the aging process" with our treatments and cures, Barzilai said.

That is, we can't turn everyone into centenarians by curing one disease at a time.

"Aging is the major risk factor," Barzilai said. If researchers can figure out which genes work to slow aging and make ordinary people more resilient to chronic disease, we all will have a much better chance of reaching our 100th birthday — and have enough breath to blow out the candles.

Christopher Wanjek is the author of the books "Bad Medicine" and "Food At Work." His column, Bad Medicine, appears regularly on LiveScience. Follow LiveScience for the latest in science news and discoveries on Twitter @livescience and on Facebook.