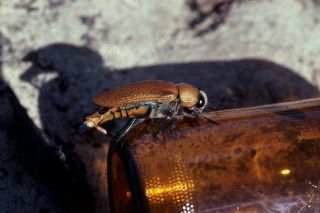 The Ig Nobel Prize Ceremony is like a mad hatter's tea party. Held each fall in olde-worlde Sander's Theatre at Harvard University, it honors scientists from around the world who have made important, but also completely off-the-wall, contributions to their fields.

This year's ceremony was a variety show of chemistry-themed sing-alongs, a Win-a-Date-with-a-Scientist contest, audience-wide paper airplane throwing, and hilarious acceptance speeches that had to end before the 8-year-old time-keeper started screaming.

Honorees at the 2011 Ig Nobels included Australian biologists Darryl Gwynne and David Rentz, who, 23 years ago, discovered a tendency among the males of a certain species of beetle to try to have sex with bottles of a certain brand of beer. "We've been waiting for the phone to ring ever since," Gwynne said as he accepted his long-awaited Ig Nobel Prize in biology. [Photo gallery of 2011 Ig Nobel winners]

The theme of the 2011 ceremony was "chemistry," and thus, winners received miniature periodic table tables.

The crowd favorite this year was Arturas Zuokas, the mayor of Vilnius, Lithuana, who received the 2011 Ig Nobel Peace Prize for demonstrating that the problem of illegally parked cars can be solved by crushing them with an armored tank.

Judging by the cheers, it seems that many Ig Nobel audience members were among the millions who have watched a viral video showing Mayor Zuokas himself driving a tank over an illegally parked Mercedes. "It's very popular everywhere. On Youtube it has almost 7 million hits!" Zuokas told Life's Little Mysteries. Even better, his campaign worked — with drivers more mindful of their actions, the city of Vilnius has seen the problem of illegal parking significantly "curbed."

The honorees played along with the act. Makoto Imai, who, with a team of colleagues, was awarded for inventing a fire alarm that sprays wasabi in order to wake up sleeping people, told the audience: "The next application will be to use wasabi spray to reduce the uncomfortable smell of shoes." Cue: his assistants, demonstrating the spraying of shoes with wasabi.

This year's Mathematics Prize went to several people for making predictions of the end of the world that failed to come to fruition; among them was Harold Camping, the evangelical talk show host behind this year's May 21 doomsday call.

None of the mathematics winners accepted invitations to attend the ceremony, but Marc Abraham, the founder and emcee of the Ig Nobel Prize Ceremony, said they had been awarded "for teaching the world to be careful when making mathematical assumptions and calculations."

The Ig Nobel Prizes are ultimately meant to make people excited about science. They do this very well.