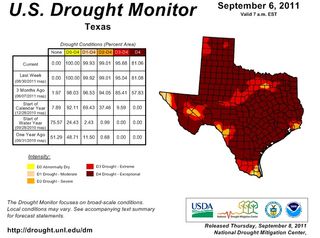 The weather in Texas this year has been downright hellish.

An epic drought, scorching heat and deadly wildfires have plagued the state for months and continue to singe the land.

An active hurricane season brought hope that rain would fall on the dusty soil and provide some relief, but so far, this year's tropical cyclone season has been of no help. Instead of dumping rain, Tropical Storm Lee, which hit the Gulf Coast last weekend, brought only winds that made the wildfires worse.

And the outlook isn't good: With La Niña's forecasted return this fall, dry weather threatens to plague the state into the winter. [Related: The World's Weirdest Weather]

This "slow-motion disaster," as some climate experts have called it, has produced a litany of records and startling statistics.

Putting it in perspective: