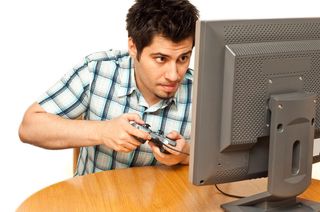 Need an excuse to play video games? Turns out, they could improve vision in adults with lazy eye.
(Image: © R.Ashrafov / Shutterstock)

Playing video games could help improve the vision of adults with lazy eye, scientists have found.

Amblyopia is a brain disorder in which vision in one eye does not develop properly. It is the most common cause of permanent visual impairment in childhood, affecting 2 to 3 out of every 100 American children, according to the National Eye Institute. Amblyopia is also the most common cause of one-eye visual impairment among young and middle-age adults. [Top 10 Stigmatized Health Disorders]

Although amblyopia can be successfully treated in children by putting a patch over the "good eye" to force the brain to use the weaker "lazy eye," few options are available for adults with this condition.

"These new findings are very encouraging because there are currently no accepted treatments for adults with amblyopia," said researcher Dennis Levi at the University of California, Berkeley. "A lot of eye doctors start closing the books on successful treatment after age 8 or so because of the widespread belief that amblyopia can only be reversed during a critical window of development in the visual cortex. If the disorder is not corrected in childhood, the damage was thought to be irreversible."

That thinking has started to change in recent years with research finding it is actually possible to improve vision in adults with lazy eye. For instance, intense training on a task such as aligning two horizontal lines sometimes leads to a 30-40 percent improvement in visual acuity.

"We had people spending 50 hours practicing an admittedly boring task, so it took a lot for the subjects to stay engaged," Levi said. "It also turns out that the improvements in perceptual learning are often task-specific, so subjects who learned to align horizontal lines could not immediately align the lines when they were flipped vertically."

The researchers wanted to see if playing video games and exposure to the richer variety of details they provide could lead to visual improvements for patients with lazy eye similar to those seen with the more mundane visual tasks. They recruited 20 volunteers with amblyopia, ages 16 to 60 — half of them had strabismic amblyopia, which is marked by misaligned or crossed eyes; six had anisometropic amblyopia, in which the two eyes have significantly different prescriptions; another three had both conditions; and one volunteer had amblyopia caused by cataracts in one eye.

Both action and non-action games yielded a 30 percent increase in visual acuity, or an average improvement of 1.5 lines on the standard letter chart used by optometrists. In comparison, it can take 120 hours of eye-patch therapy to see a one-line improvement on the letter chart in children with amblyopia. Performance was measured after every 10 hours of gaming, and some volunteers started improving earlier than 40 hours. Anisometropic volunteers also saw a 50 percent improvement in 3-D depth perception after 40 hours of playing video games.

"I was very surprised by this finding — I didn't expect to see this type of improvement," said researcher Roger Li, an optometrist at the University of California, Berkeley, who admitted he was a gamer himself.

To check if these results were due to use of the eye patch instead of games, the scientists conducted a third experiment in which seven volunteers wore a patch over their good eye for 20 hours during normal daily activities such as watching television, reading books and surfing the Internet. In the end, they showed no improvement on vision tests. These volunteers were then asked to wear a patch while playing video games for 40 hours, and afterward they showed the same level of improvement as the volunteers in the other experiments.

The volunteers who started off playing a non-action video game continued to improve after playing the action video game for an additional 40 hours. (The scientists didn't test whether the same held for participants who first played action games and then switched to the non-action ones.)

"It is not clear, yet, when vision improvement might plateau," Li said. "It's likely that those who have severe amblyopia will take longer to show improvement, but those patients also have the most room for improvement."

The researchers cautioned that patients should not attempt to treat their amblyopia by themselves. "People definitely need to work with their eye doctors," Li said.

These new results join recent findings that suggest video games can also help sharpen the mind when it comes making quick and accurate decisions. The researchers will now compare video game therapy with the use of patches for treating amblyopia in a randomized clinical trial with children and adults.

In that study, researchers will use customized video games that are nonviolent and child-friendly.

"We didn't think it was a good idea to have a 5-year-old blowing things up," Levi said.

The scientists detailed their findings online Aug. 30 in the journal PLoS Biology.