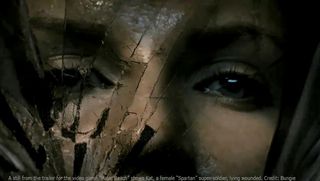 A still from a trailer for the video game "Halo: Reach" shows Kat, a female Spartan super-soldier, lying wounded on the ground.
(Image: © Bungie)

Men may have to give up many of their hobbies when they become parents, but a new study is saying they shouldn't toss out their video games, at least, if they play with their children. Adolescent girls who play age-appropriate video games with their fathers are happier, healthier and have better family connections than those who don't.

"I think we can encourage more parents to play video games with their kids, especially age-appropriate games," study researcher Laura Padilla-Walker from Brigham Young University (BYU) in Utah told LiveScience. "It's just another way to be involved with your kids."

Padilla-Walker and BYU colleague Sarah Coyne studied about 280 families with children ages 11 to 16. They asked every family member about the adolescent's video-game use as well as school performance and behavior.

The average girl played video games with her parents only once a month, though 46 percent of the girls studied never played with a parent at all. For boys, about 45 percent played games with parents, though they were often age-inappropriate games like Halo or Call of Duty.

The young girls who played age-appropriate video games with their parents (more often than not their father) were better behaved, felt more connected to their families, were less aggressive and less likely to be depressed. The game playing with their parents accounted for 20 percent of the difference in outcomes, a pretty significant effect in the social sciences, the researchers say.

The statistic doesn't seem to apply to adolescent boys, though, most likely because the effect is drowned out by the excessive amount of video-game play the boys engage in. Playing games with parents had neither a negative nor a positive effect on the boys' well-being. "Both boys and girls play the same amount of time with their parents, but boys spend a lot more time playing video games in general," Coyne told LiveScience.

In general, boys who play more video games do worse in school and are unhappier, though this is most likely due to decreased time spent on other activities, including homework and time with family and friends, the researchers said. If they play age-inappropriate games, they are also likely to be more aggressive.

The study only shows a link between video-game time and kids' happiness, not whether one causes the other. The next step, Coyne said, is to study the parents and kids in the lab to tease out possible cause and effect. Padilla-Walker notes that it could just be spending time together, regardless of activity, that makes the difference.

Games that were positively correlated with happier girls included Mario Kart, Wii Sports and Guitar Hero. So, dads, grab your little girls and that plastic guitar or Wii-mote and get playing. "In our day and age, that's what kids are doing," Padilla-Walker said. "It's not hurtful and not a lot of parents are doing it."

The study is detailed today (Feb. 1) in the Journal of Adolescent Health.