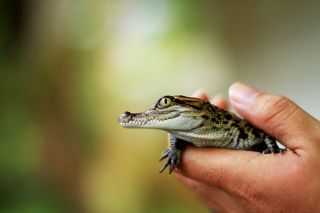 A recently-hatched Siamese crocodile at the Laos Zoo. The crocodiles are critically endangered, so conservationists are raising them in captivity for later release in the wild.
(Image: © M. Douangmyxay/WCS Laos Program)

Welcome to the world, baby crocodiles! Scientists in Laos have successfully hatched a clutch of 20 rare Siamese crocodiles, a species critically endangered by hunting and habitat loss.

The baby crocs will be released after they turn two, giving them a greater chance of survival in the wild, according to the Wildlife Conservation Society (WCS), which worked with the government of Laos to incubate and hatch the eggs at the Laos Zoo.

"We're thrilled at the prospect of augmenting the wild population of Siamese crocodiles with a new batch of healthy juveniles," Chris Hallam, the WCS crocodile project coordinator, said in a statement. [See photos]

Siamese crocodiles are classified as critically endangered by the International Union for Conservation of Nature. The reptiles grow up to 10 feet (3 meters) in length and feed on fish and snakes. According to conservation agency Fauna & Flora International, the crocs have never been known to attack humans. There are only about 250 adult Siamese crocodiles left in the wild.