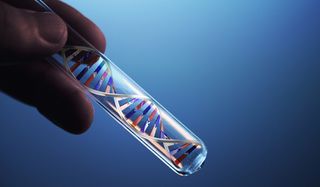 Dieters can now buy genetic tests that claim to help them lose weight. The tests, which can cost $170 or more, tell people how to make their diet compatible with their genes to achieve maximum weight loss.

One test, manufactured by Interleukin Genetics, tells clients whether they will drop more pounds on a low-fat, low-carbohydrate diet or a well-rounded one based on their genes, the company says.

A study conducted by the company and presented at the 2010 meeting of the American Heart Association found women whose diets matched their genetic test results lost two to three times more weight than those whose diets were supposedly incompatible with their genes.

Those results sound promising, but experts warn such tests are not yet ready for prime time. Scientists are only beginning to uncover the genes involved in obesity and weight loss. We are far from the time when this information will be useful to everyone, said Dr. Lee Kaplan, director of the Massachusetts General Hospital Weight Center in Boston.

"There's no question there are genetic predispositions to obesity," Kaplan said. "However, in no case is there strong enough evidence to suggest that we know particular genes that will cause success or failure with particular diets," he said.

For now, experts say, it's probably best to stick to the age-old advice to eat less, exercise more and include more fruits and vegetables in your diet.

"I'd rather spend $170 on fruits and vegetables and other wholesome foods and cook them at home than on a genetic test," said Dr. Pieter Cohen, an assistant professor of medicine at Harvard Medical School and a general internist at Cambridge Health Alliance.

Diet help from your genes

Interleukin Genetics, started selling their weight-management genetic test in 2009. Like other genetic tests marketed directly to consumers, such as those provided by 23andMe, it has not been approved by the Food and Drug Administration.

The company says it reviewed scientific studies and identified four genes related to body weight, body mass index or body fat that had also been implicated in how people responded to diet and exercise. These genes are involved in the breakdown of carbohydrates and the absorption or metabolism of fat in the body.

To take the test, dieters swab their cheeks and mail in the samples. Employees test DNA in the samples to see which version of the four genes the person has. Clients are classified as sensitive to carbohydrates, sensitive to fat, some mixture of the two, or neither, said Ken Kornman, chief scientific officer at Interleukin.

Carb-sensitive people benefit from a low-carb diet and fat-sensitive individuals benefit from a low-fat diet, the company says, so clients are told to reduce the carbs or fats in their diet by a specific amount. Those who are classified as "in between" or "neither" are assigned a generally healthy diet that does not involve cutting back particularly on either fats or carbs.

The company does not recommend specific diets, such as the Atkins diet. Instead, clients are told to reduce the carbs and fats in their diet by a specific amount. Clients are able to access an online tool that lets them track how well they're doing. "It's not intended to be a strict diet that says this is the only thing you can eat," Kornman said. "It's rather to provide some guidelines."

But experts say studies linking genes to weight loss are based on large populations, and it's unclear whether they apply to individuals.

"It's very unfortunate this is already being sold to people to use," Cohen said.

And even when researchers firmly pin down genes that affect obesity and weight loss, there will likely be dozens, if not hundreds, of genes involved, Kaplan said.

Although the Interleukin Genetics touts their recent study, experts point out it remains unpublished in a peer-reviewed journal. Publication is crucial to determining whether the results are valid, said Katherine Tallmadge, a registered dietitian and author of "Diet Simple" (LifeLine Press, 2011).

"I will wait to see more before I would advise people to invest in this kind of technology," Tallmadge said.

Some researchers are already skeptical. Of the 101 obese women in the study, only five were said to be responsive to a "well-balanced" diet based on their genes.

"We have decades of data in weight loss that a balanced diet is the way to go," Cohen said. "They're saying that, with their test, only 5 percent of people are responsive to a balanced diet," he said. The study also provides no evidence that the women were able to keep their weight off for one year.

How useful can they be?

Registered dieticians can get a good idea about what diet will work best for a particular person by collecting a detailed medical and family history, Tallmadge said. For instance, if someone has high levels of triglycerides in their blood, they likely have a genetic predisposition for it, Tallmadge said, and a dietician can tailor their diet accordingly.

But "that's not to say a test like that won't be useful," Tallmadge said. The study of how nutrition and genetics interact is an exciting field, she said. Genetic tests may be particularly useful for people with undiagnosed rare genetic conditions that impede the absorption of a particular nutrient, she said.

But some question remains as to whether genetic knowledge will be the answer for many overweight people.

"I expect there to be a continued explosion," of research in this area, Cohen said. "But whether or not that will translate into actual benefit to us as a society is really unknown at this time."

"[I] think that a deep understanding of the genes of obesity would not be as effective as serious, aggressive public health approaches to the obesity epidemic," including improving access to healthy foods and promoting activity in the workplace, Cohen said.

Pass it on: Dieters should invest in fruits and vegetables and home-cooked meals rather than genetic tests to help them lose weight.