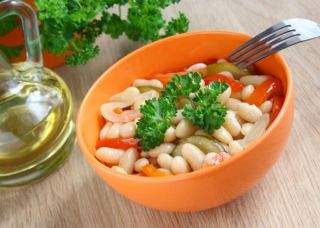 Adding fiber to your diet every day may be the key to preventing the growth of the belly fat that has been linked to chronic diseases.

A new study shows that for every 10 grams of soluble fiber a person consumes in his or her daily diet, 3.7 percent less belly fat was gained over time. Soluble fiber is found in foods such as beans, fruits and vegetables.

The study "reinforces the notion most people have that fiber is a good thing," and shows that fiber has a role in preventing chronic disease, said study researcher Dr. Kristen Hairston, an assistant professor of internal medicine at Wake Forest University Baptist Medical Center. "Ten grams above what you're doing separated those who didn't gain as much as others, and may be a guidepost for people."

Hairston said it is still unclear why soluble fiber has this effect in the body, but added that it is an area for future research.

Burning off the belly

There is more than one type of body fat. Visceral fat, also known as belly fat, surrounds the internal organs and has been linked to chronic illnesses such as diabetes, heart disease and high blood pressure. Subcutaneous fat, which is fat found just under the skin, is less of a health concern.

Researchers sought to learn why some people develop more visceral fat while others end up with more subcutaneous fat.

The study used data gathered from 1,100 Hispanic and African-American men and women over the course of five years, and measured a variety of dietary factors as well as exercise levels and smoking.

The main finding, Hairston said, was that eating more fiber appeared to lead to a healthier body, even if people ended up weighing the same.

Some other dietary factors seemed to have an effect on where fat accumulated. Eating sweets tended to be linked to lower levels of subcutaneous fat growth, while eating protein seemed to lead to more.

Penny Kris-Etherton, a professor of nutrition at Penn State University, said the study tackled an area of concern regarding the illnesses people develop as they gain weight with age.– Many of those illnesses, she said, are linked to visceral fat. (Kris-Etherton was not involved with the new study.)

Kris-Etherton's research has found links between increased fiber intake and a reduction in heart disease, and the new study may explain those findings, she said.

"Whole grains and then soluble fiber and physical activity may help decrease the increase in visceral [fat] with age," she said. "It may slow it down, prevent it. People need to eat more soluble fiber, and it'll help their cholesterol and perhaps their waistlines too."

But while the study showed fiber prevented belly fat from increasing, it's unclear if fiber consumption would help reduce fat accumulation.

Kris-Etherton noted that fiber-rich foods tend to help people feel full on fewer calories, but whether a fiber-enhanced diet would actually help people lose visceral fat was a topic for future study.

The study did have some limitations — notably, the accuracy of what people remembered eating.

"When it looked at the dietary assessment, it was using a dietary recall," said Jessica Crandall, a registered dietitian and spokeswoman for the American Dietetic Association. "It's better to actually record your food as you go versus trying to remember what you've consumed."

However, she said, the study does yield another potential benefit for patients whom she is trying to encourage to eat more fiber.

"A lot of people want to avoid abdominal fat for the vanity of it as well as the health concerns that are associated with belly fat," Crandall said. "I think that it's a great point to reference to the public. It's yet another reason to encourage higher-fiber foods."

Pass it on: Fiber may help stave off belly fat.