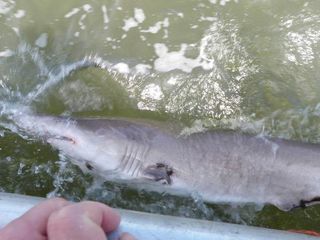 A "finned" shark that was caught recently in Delaware Bay.
(Image: © WCS)

Shark fin soup has been served as a delicacy for centuries in China and elsewhere. But it's more than just an expensive bowl of soup; it's considered to have special medicinal properties and is used in Chinese medicine. It's one of many folk remedies and alternative medicine cures threatening endangered species around the world.

The shark fin industry has come under mounting pressure in recent months. Shark populations have declined dramatically in recent years, fueled in part by the demand for shark fins. Scientists estimate as many as 73 million sharks are killed annually for their fins. The sharks are often thrown back into the ocean to die after their fins have been cut off.

Some shark species populations have dropped by 90 percent, studies find.

Despite public pleas for a ban from celebrities including Jackie Chan, Scarlett Johansson, Leonard DiCaprio, basketball star Yao Ming and others, shark fins remain in demand, defended by some Chinese Americans and restaurateurs.

Still, efforts to ban shark finning, and also shark fins, have succeeded in some places. The United States enacted the Shark Conservation Act in January, making all shark finning in U.S. waters illegal. The Bahamas recently banned all shark fishing.

Three Canadian cities have banned shark fin soup, as has the state of Hawaii. In California, a bill banning the sale of shark fins passed the state Assembly last month, but has yet to clear the Senate. This past week the Chilean government banned shark finning within its national waters, a first for South America.

It's not just sharks that are endangered.

Throughout Asia, the penises, claws, and bones of various animals including tigers, rhino, and bear, are sold in folk medicine shops to cure everything from arthritis to asthma, impotence to cancer. Last month officials along the border between Russia and China intercepted a truck of valuable illicit cargo: not weapons nor drugs but animal parts. They found more than a thousand bear claws (minus the bears), and 26 elk lips (minus the elk) weighing 143 pounds. While it's possible that the slaughtered bear and elk were used for meat, it's likely that the animals were left to bleed to death after their parts were sliced off, based on what's known about the illicit animal trade industry.

In Africa, even humans have been killed for their body parts, for exactly the same reason. In East Africa, dozens of albino men, women, and children have been killed in the past few years because some believe that their limbs have special healing powers. These tragedies highlight the very real dangers of superstition and unproven medicine.

There is no evidence that shark fins — or any of the other animal parts used in alternative medicine — do what they are claimed to do. But ancient traditions die hard, and combine with greed to help kill off some of the world's most magnificent animals.

Benjamin Radford is deputy editor of Skeptical Inquirer science magazine and author of "Scientific Paranormal Investigation: How to Solve Unexplained Mysteries." His Web site is BenjaminRadford.com.