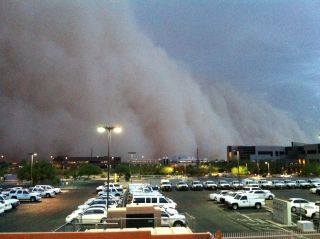 The haboob looms over Phoenix, as seen from the NWS office.
(Image: © NOAA.)

The massive dust storm that swept through Phoenix, Ariz., last night (July 5), reducing visibility to near zero and delaying flights, was a whopper, meteorologists said.

The dust storm is what's called a a haboob (Arabic for "strong wind"). In the United States, haboobs are common in Arizona, Texas and New Mexico. But yesterday's haboob was more like something you'd see in the Middle East or other arid regions around the world, said Ken Waters, the warning coordination meteorologist with the National Weather Service (NWS) in Phoenix.

"It was mind-boggling, just absolutely amazing," Waters told OurAmazingPlanet. "I've been a meteorologist for years and I've not seen a wall of dust like that."

A haboob forms after a severe thunderstorm collapses. Rain-cooled air from the thunderstorm plummets to the ground at speeds up to 100 mph (161 kph), and with so much momentum that it can't go into the ground, Waters said.

Instead, the winds kick up an enormous amount of dry, loose sand, which ripples outward.

"It's like the power of a tornado, but a different kind of phenomenon," Waters said.

Like most of the drought-stricken Southwest, Arizona hasn't had rain in months, so the sand was especially loose before last night's storm.

Arizona has dust storms every year, especially along the Interstate 10 corridor from Phoenix to Tucson, during the summer monsoon season when thunderstorms are common.Five people on average are killed each year during dust storms, typically due to blinding conditions on the highway, according to the Arizona Department of Transportation.

Last night's haboob reduced visibility to between 5 feet and near zero (less than 1.5 m), Waters said. Trees and power lines were knocked down, but no injuries have been reported.