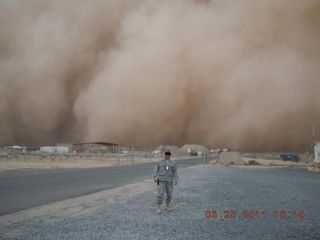 The sandstorm roars toward an undisclosed military base in Southwest Asia.
(Image: © United States Central Command.)

An undisclosed military base in Southwest Asia was recently sucker-punched by one of nature's strangest natural occurrences: the sandstorm.

Military personnel captured photos of the huge sand clouds as they descended without even 15 minutes' warning.

"Only days before, I had been telling my family that while this base often boasts high-speed, whipping winds, it doesn't have the dramatic sandstorms portrayed in the film 'The Mummy,'" U.S. Air Force Captain Heath Allen wrote in a U.S. Central Command blog post."Well, that was about to change."

About 10 minutes before the sandstorm roared over the base, a wall of sand peeked at the troops from across the desert. Troops scrambled for cover because big sandstorms can move whole sand dunes . They can move so much sand that the storm front looks like a solid wall up to a mile high. [See more photos of the huge sandstorm ]

When the atmosphere grows unstable, strong winds can roar across the desert , vibrating the dry, loose sand. The sand particles then leap up and down, repeatedly striking the ground. This creates smaller and smaller sand particles that are picked up by the wind and carried in giant waves of sand.

When the wave of sand arrived at the military base, it hugged buildings and sent soldiers and airmen scattering for cover.

"This was no typical sandstorm," Allen said. "My roommate, who works at a nearby detachment about 45 minutes away, said that vehicles traversing this country's version of an interstate were making U-turns and traveling into on-coming traffic just to escape the storm."

The sand slammed into the military base and blotted out the sun. In less than 10 minutes, a fairly sunny day was transformed into pitch-black darkness.

The sand hit so quickly that service members had no chance to shut off air conditioners, which sucked in the sand like vacuums and sprayed the inside of buildings with a gritty coating of desert sludge.

Hallways transformed into long sandboxes. A small dune collected near the entrance. The dining hall scrambled to cover food to protect it from the dust, which had already coated the floors. Most rooms were blanketed with sand.

This was the first and worst of multiple sandstorms to pelt this area in the last month, according to Allen. Contractors with more than 10 years on site and airmen with myriad Middle Eastern deployments to multiple locations claimed this particular sandstorm was the most colossal they had witnessed.

"I can still taste the sand in my mouth," Allen said. "Dust never had such an overpowering odor."