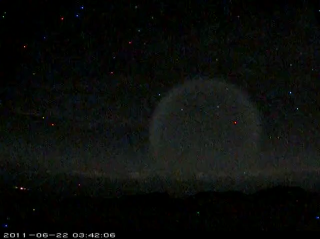 Two telescopes in Hawaii caught this mysterious burst in the sky on film. The sight is likely that of a test missile venting fuel in the upper atmosphere.
(Image: © Kanoa Withington/CFHT)

The mysterious phenomenon took place in the wee hours of the morning on June 22. At about 3:37 a.m. local time, a white sphere blossomed in the night sky, expanding like a soap bubble and then disappearing. A webcam on the Canada-France-Hawaii Telescope on Mauna Kea, the tallest mountain in Hawaii, captured the image, as did a camera on the Subaru telescope, also on Mauna Kea. [Image Gallery: Streaming Contrails]

Atmospheric flare from a minuteman III ICBM missile from Kanoa on Vimeo.

Astronomers from the observatory put the image online, where it became something of a sky-enthusiast mystery. Observers floated theories ranging from a trick of the camera to solar events to meteors. But none of the evidence fit until a user named "calvin737" on the Starship Asterisk astronomy discussion forum pointed out that Vandenburg Air Force Base in California had launched a unarmed test Minuteman III missile just minutes before the bubble appeared in Hawaii.

Here's what likely happened, according to Phil Plait of the Bad Astronomy blog: In the missile's third stage motor are ports that are blown open by an explosive charge about three minutes into the launch. This opening terminates the missile's thrust so it can be targeted accurately.

At the point when the charges go off, the missile is above most of Earth's atmosphere, so the fuel blows outward in a sphere. The expanding fuel might also compress the atmosphere as it expands, exciting charged particles in the air and creating a ring of light.

This wouldn't be the first time that a strange sky phenomenon proved to be the work of humans. In 2009, a weird spiral hallow above Norway turned out to be caused by a failed Russian missile launch. And in November 2010, a mysterious cloud that looked like a missile trail was likely just an ordinary aircraft contrail.