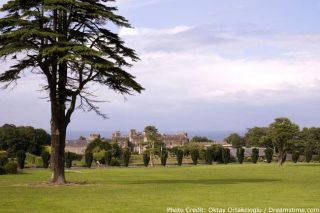 The bark of certain yew trees can yield a medicine that fights cancer. Now scientists find the dirt that yew trees grow in can supply the drug as well, suggesting a new way to commercially harvest the medicine.

Scientists originally isolated the drug paclitaxel—now commonly known as Taxol—in 1967 from the bark of Pacific yew trees (Taxus brevifolia) in a forest near the Mount St. Helens in Washington. This yew also yields related compounds known as taxanes that can be converted to paclitaxel. Research since then has revealed other yew species generate paclitaxel and taxanes as well, as do some fungi and certain hazelnut varieties.

A decade ago, University of Portland biochemist Angela Hoffman and her colleagues were interested in growing yew in the lab from cuttings. They discovered small yew branches could secrete paclitaxel into plant food, raising the possibility that yew trees might release the drug into the soil .

The scientists collaborated with Weyerhaeuser, a forest-products company that grows yew trees to extract taxanes. Their research now suggests yew trees might secrete paclitaxel and other taxanes from their roots. The scientists recently presented their findings at the American Chemical Society meeting in Chicago and will detail the results in June at a joint meeting in Boise of the Northwest Region of the American Chemical Society and the American Association for the Advancement of Science Pacific Division.

Weyerhaeuser grows yew trees for several years before pulling them up and replanting the fields. "This means they have acres of soil they could use," Hoffman said. She estimated harvesting paclitaxel from the soil can become profitable if the growers can generate more than 20 grams per acre.

Based on lab experiments, Hoffman and her colleagues calculated that the top foot of an acre of yew dirt should yield roughly 35 grams of paclitaxel and some 70 grams of related taxanes, "stuff that would have just gone to waste anyhow," Hoffman told LiveScience.

To field test their ideas, the scientists took nearly 40 cubic feet of yew soil from a Weyerhaeuser field and mixed it with a few gallons of rubbing alcohol in a cement mixer for several hours. The taxanes dissolve in the alcohol, which the scientists then filter off and extract taxanes from. The field results suggest an acre of soil would yield about 25 to 30 grams of paclitaxel and about 200 grams of related taxanes.

On average, a single dose of paclitaxel contains about 10 to 200 millionths of a gram of the drug, Hoffman said. Twenty grams of the medicine "would probably be enough to last 30 to 50 people throughout their entire treatment," she estimated.